As one who started attending SFO the following season, hearing this live Jenufa arouses not just pleasure but nostalgia and a kind of envy. Literally on my first day in San Francisco (June 28, 1981) I not only took in my first Gay Day parade but stood through a Don Giovanni matinée with Carol Vaness (Anna) and Giuseppe Taddei (Leporello): equally mind-blowing events to a brand-new East Coast college grad. In the close community of standees I grew to know that year, "the Söderström and Jurinac Jenufa" was already the stuff of you-should-have-heard-it legend. Wonderful now to hear why, in experiencing this broadcast fourth of a run of six performances.

Janáček's deeply moving opera, premièred in 1904, rides very much on the shoulders of its two leading women—both of whom are actually implicit in the original title, Její Pastorkyná (Her Stepdaughter)—still used in the Czech context. Having worked on an earlier opera (The Story of a Romance) with journalist and feminist Gabriela Preissová, he decided to adapt her controversial play about Moravian village life as a libretto. Proportionally, the Czech operatic tradition has embraced more female-engendered librettos than any other, way back to Smetana and Dvořák in the 19th century. The plot involves two tenor suitors (the stepbrothers Laca and Števa) but revolves around the interrelation and identification of the promising village beauty Jenůfa —not only literate but a teacher, like many members of the composer's family—and her strict, much respected stepmother, called "Kostelnička" ("the Sextoness") for her piety and good works.

Jenůfa has been called "Czech verismo": its narrative span takes in a slashing, an abandonment, an infanticide, a public confession and an arrest. As in Cavalleria rusticana, premarital sex and provincial morality instigate the tragedy. But all this "realism" coexists with a Christian framework of forgiveness more essential to Jenůfa’s core than even that underpinning La fanciulla del West. (When Jenůfa becomes a mother, she gets musically enveloped in a Marian glow, as in her lovely second act moonlit prayers to the Virgin.) This is the rare opera in which all four principal characters—even the vain, shallow, entitled Števa—undergo perceptible moral transformation. Kostelnička—a deeply religious woman—takes on (with her awful crime of killing the child) the threat not only of public exposure but of eternal damnation, all out of concern that Jenůfa’s future be happy (and Števa-free). In her brave and riveting final confession, she is able to admit that her own pride played a role, but she cares as much about Jenůfa's forgiveness as she does for her Savior's. The opera's two final scenes— Jenůfa's superhuman forgiveness of her stepmother's monstrous transgression, and the thrilling outpouring of mutual recognition with which she and Laca resolve to face life's travails together—lift Jenůfa into a higher moral and emotional realm than most composers ever attempt.

One of the great sopranos of the postwar period, the Croatian-born star of the Vienna State Opera and the Glyndebourne Festival, Sena Jurinac (1921–2011) had a very sparse North American career. Having defaulted on creating Samuel Barber's Vanessa at the Met in 1958, she in fact made her United States debut at San Francisco Opera the following year as Cio-Cio-San; that season she sang other of her lyric roles: Mozart's Donna Anna, Wagner's Eva and her particular specialty Strauss's Composer in Ariadne auf Naxos. In the subsequent decade, Jurinac salted her repertory with the heavier roles of Leonore and Tosca and lost some of the youthful radiance of her sound. It was again to San Francisco Opera that she returned with her two great late career triumphs: the Marschallin (1971) and the Kostelnička (1980). She had ventured many Jenůfas auf Deutsch in Vienna from 1964 to 1974, before shifting over to the Kostelnička in 1978. (As with Karita Mattila, San Francisco's stepmother in 2016, having played the stepdaughter so often deepened the poignance of her interpretation.) Jurinac's darkened instrument retains an impressive degree of firmness, honestly projecting clean musical lines in a role sometimes subjected to the shards of shattered instruments. She never resorts to melodrama or hamming. These San Francisco performances—her first Kostelnička in Czech—marked (as for her co-star) a stirring farewell to the Company.

Elisabeth Söderström (1927–2009), active onstage from 1947 through 1999, enjoyed one of the most varied careers of any international soprano, evolving from light parts like Susanna and Adina to full lyric roles. Of mixed Swedish and Russian heritage, she developed a special affinity for Slavic repertory, programming (on her frequent recital tours) and recording Mussorgsky and Rachmaninoff songs and becoming perhaps the leading soprano exponent of Janáček's operas in the 1960s and 1970s—in Swedish, English, French and Czech. Her Company debut had come in 1977 as Kát'a Kabanová (in English)—with Jenůfa and Emilia Marty (in the The Makropulos Case, which eventually she directed at San Francisco Opera) the three Janáček heroines she memorably recorded with Charles Mackerras. Her soprano as heard here projects its characteristic extremely personal timbre, with a quicksilver vibrato lending a very human shimmer to her Jenůfa’s higher passages. Plus Söderström—like the great recitalist she was—supplies a detailed, word-by-word emotional response to the text. In a November 1986 interview in Opera with Max Loppert, Söderström recalled the 1980 production heard here. "I remember a very moving Jenůfa in San Francisco, which I sang with Sena Jurinac. She was my idol for so many years, when I started singing: and to be allowed to be with her on stage, and to find that we understood each other so completely, the rapport was so fantastic, this I can never forget." The sopranos' teamwork is keenly felt in Act II—surely among the tautest and most perfectly shaped acts in the operatic canon, up there with Act III of Bohème.

This 1980 run was to be Vienna-born conductor Albert Rosen's only work with San Francisco Opera. Half Czech by birth and largely trained in Plzeň and Prague, he commands Janáček's blend of lyrical outpouring and percussive harshness. The score begins with and frequently returns to an ostinato figure signaling the mill that underlies the Buryja family fortune (and jealousies). The musical edition Rosen used here—with the notable exception of a valuable restoration of a key Act I monologue for Kostelnička—bore the traditional changes in orchestration imposed on the composer by a hostile colleague with administrative power. The scholarly Mackerras finally premièred Janáček's original conception to San Francisco Opera audiences in the 1986 revival featuring another thrilling pair of divas, Gabriela Beňačková and Leonie Rysanek as Jenůfa and Kostelnička.

As Laca, California-born Allen Cathcart wields a strong tenor that held him in good stead internationally in a largely dramatic repertory. Protean tenor William Lewis—here pretty much ideally cast as the cad Števa, which he'd honed in English at the Met—went on to serve San Francisco in many vivid roles through 1991. Sona Cervena, a fixture in San Francisco from 1963 onward, brings native Czech and character actress skills to the matriarch—a role she had taken at the English-language company première in 1969 starring Felicia Weathers and Irene Dalis. San Francisco Opera wasn't the first American company to stage Jenůfa: the Met mounted it in German in 1924 for Moravian superstar Maria Jeritza, and Lyric Opera of Chicago imported a Covent Garden English-language version in 1959. Yet under Kurt Herbert Adler, San Francisco was the first American company to climb aboard the worldwide Janáček revival of the 1960s, presenting Makropulos Case, Jenůfa and Kát'á Kabanová between 1966 and 1976. The choice to offer this Jenůfa in Czech also proved an influential innovation.

Jenůfa is beyond doubt one of opera's great experiences. As a Berkeley grad student, I took in three of Mackerras' titanic 1986 performances—each time converting opera "newbies" into people open to the power of the art form. Of all the operas I've taught at the college level, it's the piece that has most surprised and most affected students unfamiliar with it. Thanks to the magic of Söderström and Jurinac in channeling Janáček's all-too-human characters and phenomenal score, San Francisco Opera’s milestone 1980 traversal will surely inspire listeners for years to come.

Critic and lecturer David Shengold resides in New York City. He regularly writes for Opera News, Opera, Opéra Magazine, Opernwelt and many other publications. He has taught courses on opera and literature at Williams, Mount Holyoke and Oberlin Colleges. He has done program essays for companies including the Metropolitan Opera, Lyric Opera of Chicago, Washington National Opera, ROH Covent Garden, and the Wexford and Glyndebourne festivals. 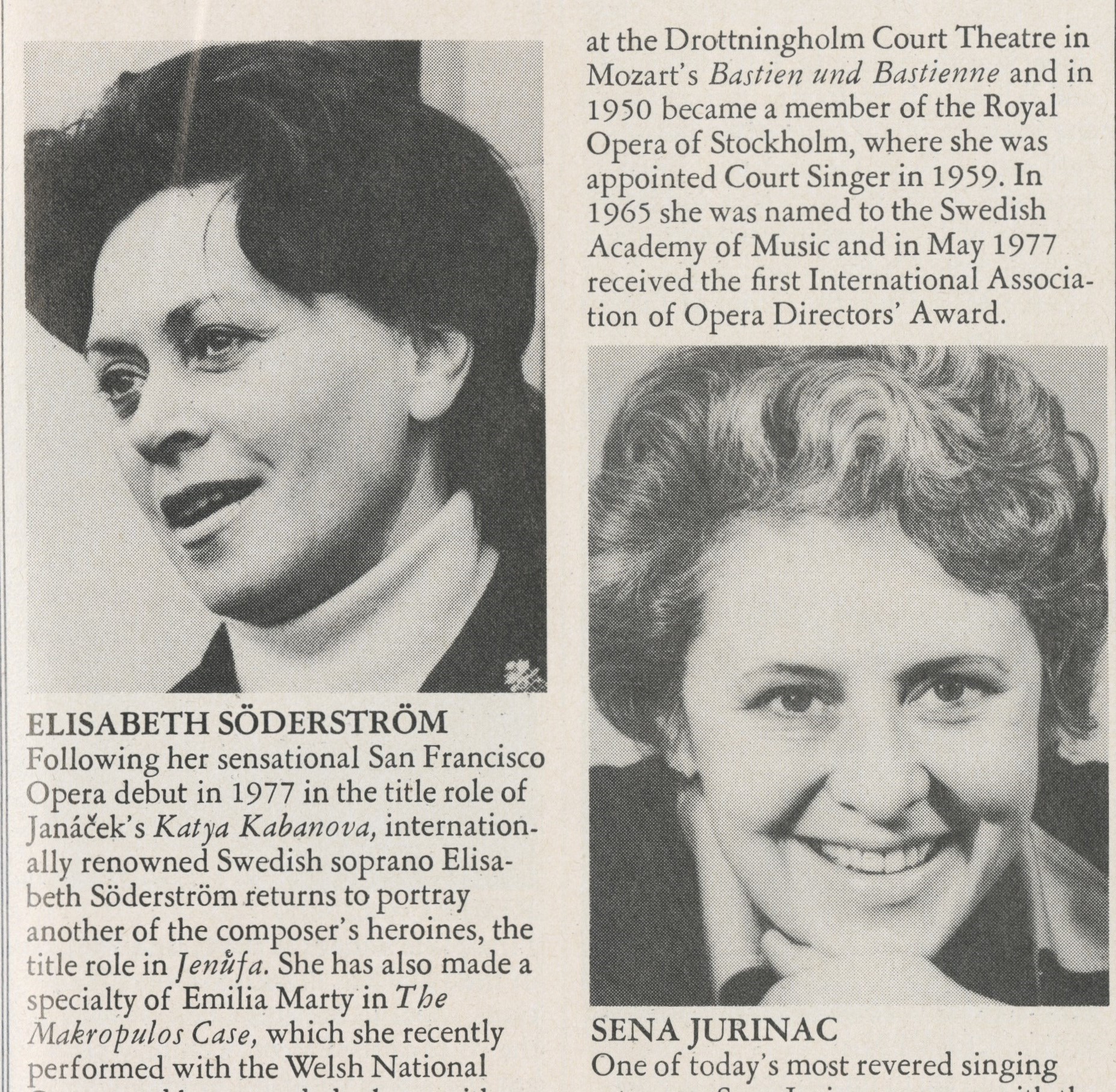 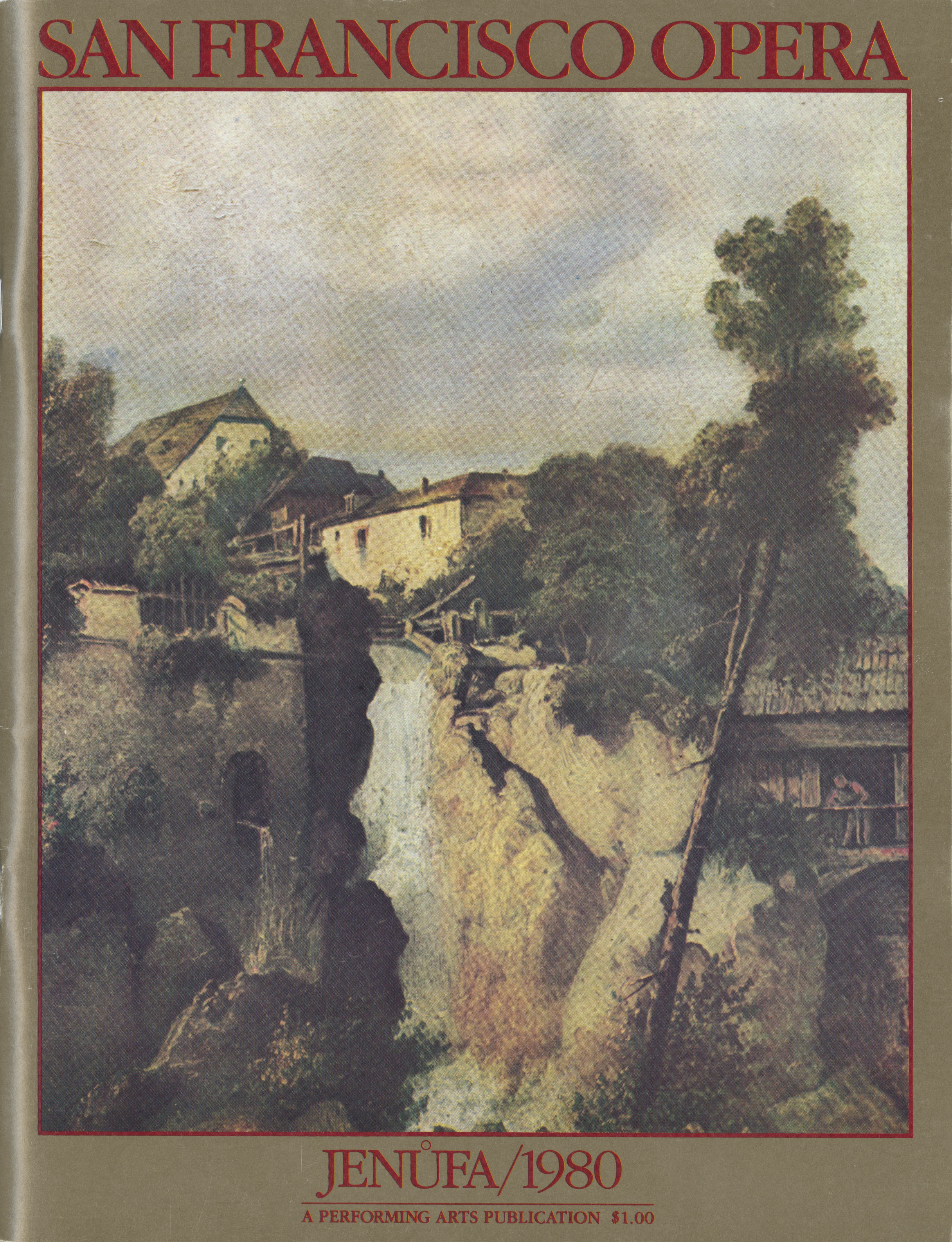