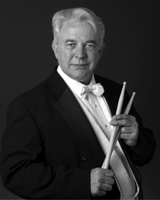 Born in Chicago, Richard Kvistad is the Principal Percussionist and Associate Timpanist of the San Francisco Opera Orchestra. He formerly held the same position with the Pittsburgh Symphony Orchestra, where he performed as soloist. His first orchestra employment was with the Florida Symphony of Orlando, followed by several seasons with the Grant Park Symphony and the Chicago Lyric Opera Orchestra.

Mr. Kvistad holds a Bachelor of Music degree from Oberlin Conservatory of Music and a Master of Music degree from the University of Illinois. His primary teacher was Cloyd Duff, timpanist of the Cleveland Orchestra under George Szell for 40 years. Composition studies include workshops with Lou Harrison and orchestration studies at Salzburg’s Mozarteum Academy of Music with Franz Oberhoff, former assistant to Richard Strauss. He also studied the music of Bali, Java and India at the Center for World Music in Berkeley, which is what brought him to California in 1974.

Mr. Kvistad has performed extensively in the jazz idiom. He was a co-founder of several contemporary music ensembles as well, including the Blackearth Percussion Group, the Kotekan chamber music group, the XYLO Percussion Quartet, and his current contemporary chamber music group, Adesso. He has worked with John Cage, Aaron Copland, Christoph von Dohnanyi, Lou Harrison, James Levine, Kurt Masur, Roger Norrington, Carl Orff, Eugene Ormandy, Seiji Ozawa, Steve Reich, William Steinberg, Igor Stravinsky, and John Williams, to name just a few. Mr. Kvistad has recorded numerous LPs, compact discs, television and film scores, and composed many works and methods for percussion, including a Concerto for Timpani and Chamber Orchestra that has been performed worldwide. He was featured in a kettle-drum demonstration on the television program "Mr. Rogers' Neighborhood."

Rick is the proud father of two beautiful, artistic and cool daughters, Laura and Jen, along with three super cute grandchildren, Pearlina, Saffron and Jesse.