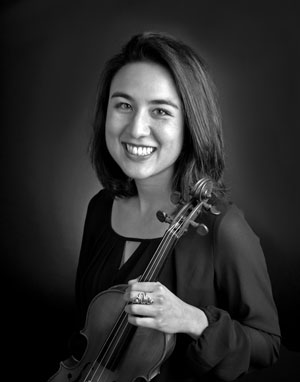 Seattle native, Maya Cohon joined the San Francisco Opera Orchestra in 2017. Previously she was a member of the New World Symphony in Miami under the direction of Michael Tilson Thomas. While a member of the New World Symphony, Maya was a featured soloist in performances of Winter from Vivaldi's Four Seasons and the American premier of Bernard Deutsch's composition Mad Dog. Maya also performs with the Seattle Symphony, the Saint Louis Symphony Orchestra and the Breckenridge Music Festival. Growing up in a family of musicians, she cultivated her love for chamber music by reading string trios, quartets and quintets with her cousins, aunts and uncles. During her time in Miami, Maya performed chamber music that spanned a range of musical and narrative styles, including a world premiere of The Wind Will Blow Us Away by San Francisco composer Sabha Aminikia and George Crumb's Black Angels. She is a founding member of the Rose Quartet, an ensemble formed by New World Symphony alumni, who made its debut at the Centrum Port Townsend Music Festival in 2017.

Maya earned a Bachelor of Music from Northwestern University where she studied with Almita Vamos. During that time, she performed as a member of the Civic Orchestra of Chicago. Maya loves exploring new cultures and cities and has enjoyed performing in venues all over the world, including Suntory Hall in Tokyo, Carnegie Hall and regional churches in Northern Italy. In her free time, she enjoys running, hiking and swing dancing.