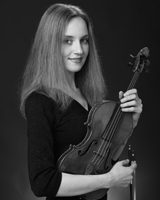 Born in Moscow, Russia, Mariya began playing at the age of five, following in the footsteps of her violinist father. Starting at the Gnessins Moscow Special School of Music, she continued her studies at the Moscow Conservatory, class of Marina Yashvili. After moving to the US, she earned a postgraduate degree at the Manhattan School of Music, studying with Glenn Dicterow, Lisa Kim, Yoko Takebe and Albert Markov.

Participation in a number of international musical festivals, including the Verbier Festival Orchestra, where she served as concertmaster, the Lucerne Festival Academy, Institute Attergau, and others took her around the globe. This provided her the opportunity to work with the great conductors of our time, such as James Levine, Charles Dutoit, Gustavo Dudamel, Sir Neville Marriner, Marcello Viotti, Mariss Jansons, Neemi Jarvi and many others.

An avid chamber musician, she has appeared as part of several local groups, including the Eos Ensemble and the Farallon Quintet. She performs at various chamber music series including MOTH, the San Francisco Noontime Concert series and is the concertmaster and a soloist for the Russian Chamber Orchestra. She appears with other groups including San Francisco Academy Orchestra, the Midsummer Music Festival and regularly plays as a substitute member of the San Francisco Symphony.

As an educator, Mariya often coaches chamber groups and orchestras and performs on outreach programs. She teaches privately and is frequently invited to judge local competitions. She has been on the faculty of the Golden State Youth Orchestra since 2015 and is the conductor for the Galbraith Honor Strings. Mariya resides in Millbrae with her husband and two kids.