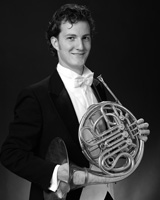 Winner of numerous solo competitions, he was awarded Grand Prize at the 2008 Concours International d'Interpretation Musicale in Paris, the 2007 International Horn Competition of America and the 2003 Farkas Solo Horn competition.

Mr. Rivard has served as guest Principal Horn with the Los Angeles Philharmonic and performed with the Philadelphia and Metropolitan Opera Orchestras. He was also a featured soloist with the Houston Symphony. Previous positions include the Colorado Symphony and Florida Orchestra. A Julliard graduate, Mr. Rivard has performed with Santa Fe Opera, the Sarasota Music Festival, the Norfolk Chamber Music and the Verbier Music Festivals. As the Horn professor at San Jose State University, Mr. Rivard loves teaching and inspiring young students. Every year he volunteers at local schools, performing for youth hoping to give as many children as possible the opportunity to enjoy live music.