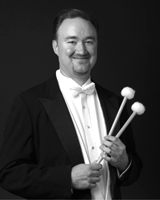 Before coming to San Francisco Mr. Burgardt had been a member of the Omaha Symphony as well as the New World Symphony in Miami Beach.

Recent solo appearances in the Bay Area include a performance of Richard Kvistad’s Concerto for Timpani with the Adesso Ensemble. Recent recordings on which you can hear Mr. Burgardt include the San Francisco Opera’s Symphony at the Opera collection with Maestro Runnicles conducting, as well as the Opera’s recordings of Jake Heggie’s Dead Man Walking and André Previn’s A Streetcar Named Desire. Recordings with the New World Symphony under the direction of Michael Tilson Thomas include Coptic Light of Morton Feldman, Alma Brasileira of Heitor Villa-Lobos, and New World Jazz.

In the Opera’s off-season you will likely find Mr. Burgardt playing with the San Francisco Symphony or on the golf course, ski slopes, or doing yoga.