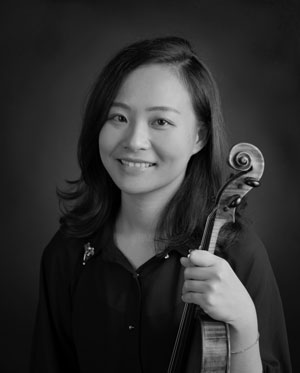 Jennifer Hsieh joined the San Francisco Opera Orchestra in 2017. Prior to joining the San Francisco Opera, Jennifer was a member of the New World Symphony in Miami under the direction of Michael Tilson Thomas. During her studies, she served as the concertmaster of the New England Conservatory Chamber Orchestra and Philharmonia. As a soloist and chamber musician, she performed at Carnegie Hall, Alice Tully Hall, New England Conservatory's Jordan Hall and Taiwan's National Concert Hall. Her string quartet, Oceanus received the Entrepreneurship Grant from the New England Conservatory and led a series of masterclasses and performances in Taiwan. She has participated in many music festivals including the Tanglewood Music Festival, the Verbier Festival, the Music Academy of the West, the New York String Seminar, the Kneisel Hall Chamber Music Festival and the Aspen Music Festival.

Born in Taipei, Taiwan, Jennifer was raised in a family of music lovers. She began piano at age 3 and at age 10, she picked up the violin as a secondary instrument and was immediately taken with it. Jennifer moved to New York City at the age of 13 for her violin studies at the Juilliard Pre-College division. She received her Bachelor's degree and Graduate diploma at the New England Conservatory and earned her Masters degree at the Juilliard School. Her teachers include Naoko Tanaka, Musuko Ushioda and Malcolm Lowe.