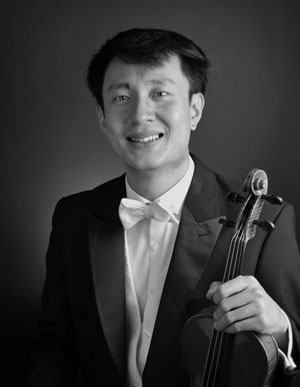 Dian Zhang joined the first violin section of the San Francisco Opera Orchestra in 2017. As an advocate for music and its ability to transform and transcend us into the sublime, Dian strives to embody this mission in all his musical endeavors. Whether it is performing Steve Reich's masterpiece of minimalism, Music for 18 Musicians, learning the viola to play Beethoven's Grosse Fugue and the Op. 130 String Quartet, giving a lecture recital on the synthesis of musical folklore and the avant-garde in Bartok's First Violin Sonata or teaching undergraduate college courses on the fundamentals of music and composition, Dian has always tried and will continue to be an advocate for the art of music.

He has participated in chamber music festivals such as the Yellow Barn Chamber Music Festival, Norfolk Chamber Music Festival and Four Seasons Chamber Music Festival, where he collaborated with eminent musicians such as Cho-Liang Lin, Donald Weilerstein and Robert McDonald. Dian has performed in chamber and new music concert series such as Syzygy and Context in Houston and with the Gold Coast Chamber Players in the Bay Area. Partaking in numerous community engagement endeavors has taken him to a variety of venues, from lunchtime concerts at the Sidney Kimmel Cancer Center in Baltimore to the Methodist Hospital located in the Houston Medical Center.

Dian is currently finishing a doctoral thesis at Rice University on the two Violin Sonatas by Béla Bartók, focusing on processes of cross pollination between eastern European folk music and the musical avant-garde style of the early 20th Century.