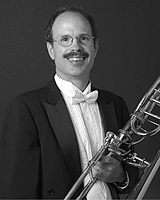 Mr. Ridge received his Bachelor of Music and Master of Music degrees from the New England Conservatory of Music and a Professional Studies Diploma from the Mannes College of Music.