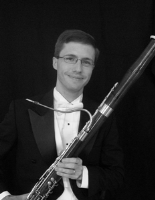 Daniel MacNeill joined the San Francisco Opera Orchestra in 2012. He began studying bassoon at the age of 13 in South Dakota where he grew up. From the age of 15, he performed regularly with the Black Hills Symphony, alongside his first teacher, Mary MacPhee. He received his diploma from the Interlochen Arts Academy, while studying with Barrick Stees and went on to study with Judith LeClair at the Juilliard School.

Daniel served as Associate Principal Bassoon in the Hawaii Symphony's 2012 inaugural season, as well as with the Honolulu Symphony from 2004-2006. He has also performed with many of the Bay Area ensembles including the San Francisco Symphony and Ballet.

Summer festivals Daniel has attended include the Aspen Music Festival, the National Repertory Orchestra, the Spoleto Festival (Italy), the Kyoto International Music Festival Japan, Kent-Blossom Chamber Music Festival and the Interlochen Arts Camp. He is on faculty at San Francisco State University and previously served as instructor of bassoon at the Punahou School from 2007-2012. Daniel would also like to thank The Mr. Holland's Opus Foundation for their generous gift of a new bassoon in 2000.

In his spare time, he enjoys rock climbing, traveling and trying to find the perfect coffee beans for making espresso at home.