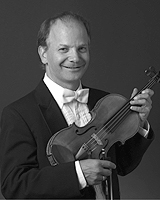 Mr. Reiss has been a featured soloist with the San Francisco Ballet Orchestra, the Carmel Bach Festival, the Central Massachusetts Symphony, the National Repertory Orchestra, and the Vallejo Symphony.

Mr. Reiss earned his Bachelor of Music degree while working with Rafael Druian at Boston University, and in 1987 became an Associate of the Royal College of Music in London where he studied with Trevor Williams. He has participated in the Tanglewood, Spoleto, and Colorado Music Festivals.

Craig is the founding member of the Eos Ensemble, a chamber group comprised of Opera and Ballet musicians, whose goal is to present concerts of wide ranging musical styles and instrumental combinations. The San Francisco Classical Voice wrote of them recently: "they performed with depth and power."

Craig enjoys skiing, running and cycling when he’s not enjoying time with his wife Cheryl and kids Alana and Julian.