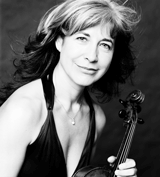 CarlaMaria continues to have a very active chamber music career. She has performed throughout the world with such artists as Sir Yehudi Menuhin, Hephzibah Menuhin, Rudolph Serkin, Pinchas Zukerman, Steven Isserlis and Daniel Hope. She has toured Europe, South America, Israel and Australia as a member of the Zukerman and Friends’ Ensemble and has been an active participant at numerous Festivals including Marlboro, Santa Fe, Gstaad, IMS Prussia Cove, Aldeburgh, Savannah, Mecklenburg and Schleswig-Holstein. In 2012, she traveled to Italy to work on a recording project of chamber music works by Koechlin and later that year collaborated with Menachem Pressler, Daniel Hope, Lorenza Borrani and the Emerson String Quartet at the Savannah Music Festival. In 2013, CarlaMaria performed the Loeffler songs with Anne Sofie von Otter and later that summer was invited to play Principal Viola with the Chamber Orchestra of Europe under the direction of Nikolaus Harnoncourt in Graz, Austria. Other engagements have included chamber music collaborations with the Danish String Quartet, another tour with the Chamber Orchestra of Europe under the direction of Andras Schiff and an invitation to give a chamber music recital - as a member of the Borrani Trio - and a viola master class at the 42nd International Viola Congress in Porto, Portugal.

A passionate educator, CarlaMaria has been a regular guest teacher of the Jerusalem Music Center coaching chamber music and orchestral studies to aspiring young musicians from all over Israel including the Young Israeli Philharmonic. She continues to mentor young artists and since 2018 has begun her association as a lecturer with EUphony, a cooperative project of chamber music and orchestral training in association with several Universities and Music Institutions in Europe, CarlaMaria has also had a long association with the Mehli Mehta Foundation in Mumbai, mentoring teachers and helping to establish new education programs for young children. From 2016 to 2018, she was Adjunct Professor of Viola at UCLA. Engagements this year include participating at the Brixen Classics Festival, the Salt Bay Chamber Music Festival and as a Guest Faculty member of NYO-USA and the Tanglewood Music Center.