Backstage with Matthew: The Sounds of Rome

On Wednesday we raised the curtain on our breathtaking new production of Tosca. It was such a proud moment for me and for so many others in the Company: the birth of an exquisite new legacy production conceived for San Francisco Opera, built here by our own artists, artisans and technicians, and created for this city at this time. It’s a searingly incisive expression of this powerful opera and I hope that you will have a chance to see it.

Through these Backstage emails we’ve explored a number of the visual elements of this new Tosca production, so I wanted to go a slightly different direction today and look at the sounds of Tosca. But not the sounds of the singers or the orchestra; rather the sounds of Rome. The sound world that pulls us into Rome of 1800 and the atmosphere of the Eternal City.

The sound department at San Francisco Opera is tucked away high in the opera house, and is responsible for all sound effects, sound recording, mic’ing, editing and all our electronic media activity (like OperaVision and the simulcasts). It is headed by Doug Mitchell, an incredible professional and colleague who has been with the company since 2001 and whose knowledge and leadership has been so instrumental in keeping SFO at the absolute forefront of technological capability.

Sound in Tosca is a big deal. Both Doug and Tod Nixon, our senior audio engineer, who has created the sound world of Tosca, talk of this as being one of the most comprehensive uses of the Opera’s sound capabilities. In fact, the sound demands of Tosca are so extreme that they have to find work-arounds to accommodate the number of MIDI channels (the means by which electronic sounds and instruments interface with each other).

Sound in Tosca falls into three main areas: cannons, organ and bells. But, overarching all those things is the design of the sound layout. Since arriving here in 2000, Tod has been a part of huge changes in the Opera’s ability to represent sound effects in the house. When he arrived, something like a bell sound was a monophonic recording of a single bell, played through a single speaker. The sound was artificial, and very clearly came from a single point in the house.

We have a large number of speaker locations throughout the house and on stage, which remain hidden but conceal a huge amount of sound creating power. Most of these speaker positions, like the large arrays in each organ bay, have been in place for many years. But recently we are able to integrate them as a coherent system to place sounds in a virtual space between and beyond the individual speakers. Tod has even added some new locations this time – little speakers tucked away in cunning locations in the house which help all members in the audience feel connected to the sound effects. All of the sound equipment in the Opera House is from our tremendous partners at Meyer Sound, the pre-eminent audio company based right here in Berkeley. 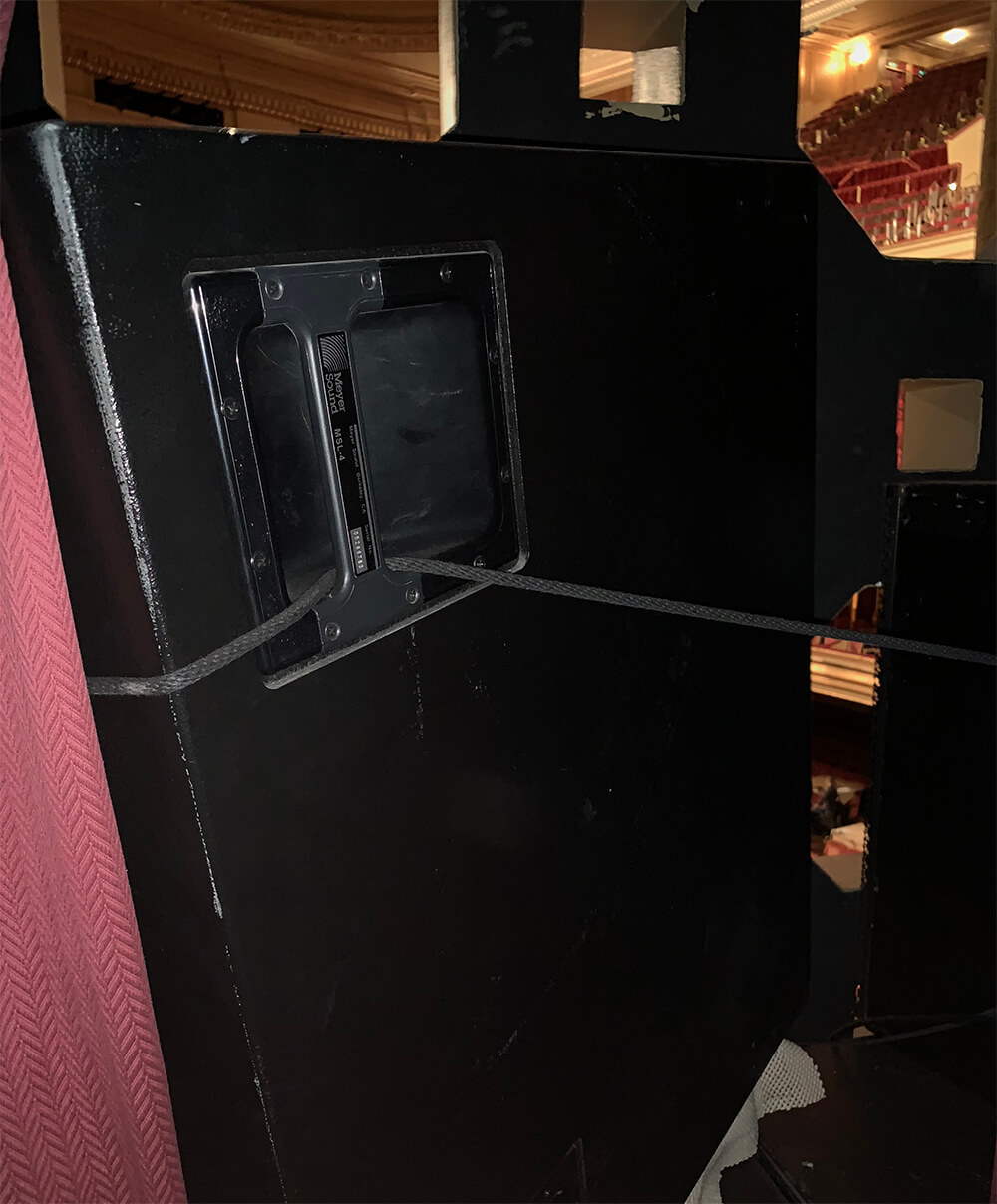 With the speaker locations spread all over the stage and auditorium, Tod is then able to create a 3D space in which sound can be programmed to be heard at any point. By using a combination of delays between speakers, reverb effects, and changes to the balances between the speakers, a sound effect can be placed anywhere in the hall, even if there is not a speaker there. Tod is able to make sound even track across space in the hall. You can see that happening in this little video which shows with the two yellow dots how two bell effects are programmed to move around the hall by using the configuration of speakers (the little blue boxes).

This kind of 3D sound mapping is only possible with more recent software and it makes something like the top of Act 3 of Tosca so realistic and so magical. As Rome awakens, bells are heard, ringing all across the city. Puccini actually wrote in specific pitches and specific places for the bells – they are a part of the score of Tosca.

By using this sound mapping technology, we’re able to immerse the audience into a much more realistic world where it feels like we’re surrounded by the skyline of Rome. Sound doesn’t just have to come from the stage – it can come from everywhere.

My big question for Tod was: where do the bells come from? Are these recordings of specific bells? Here, Tod lets us in on a slight of hand. He says that it is almost impossible to sample an actual bell in a specific place. The ability to get a clear sample of a specific bell in a real-world environment is next to impossible. Church bells exist in real-world, outdoor environments and you inevitably get some kind of street noise, or bird noise creeping in. So Tod builds his own bell sounds! He uses the old monotone bells that we’ve had for years and years – they’re sadly not labeled as to which church they came from – and he layers in different reverberation effects and delays to help give them a much greater realism. You’ll hear in Act 3 one particularly low bell (you can’t miss it!) and that is actually a composite of a number of bells – one to get the low fundamental of the sound, and then other bells in the same harmonic key, through which Tod builds up the overtones of the bell. (Bells have such a distinct sound because of the proliferation of overtones that they create over the main note.)

So, although it would be a romantic idea to have the real bells of Rome for this scene, the ability to capture those bells would make the sound effects much harder to work with, and so we rather create the sounds such that they can work explicitly in the opera house environment.

The same is true of the cannons. Doug tells me that the cannon effects, if you sample a real cannon, can be terrible and, in our environment, sound like a cardboard box falling over! As such, Tod again builds up the sound, layering elements of the cannon until we get a sound that feels fully representational.

By the way, here is the rule of thumb in terms of who actually triggers a sound effect. If it’s something written in the score (e.g. the bells in Tosca), then it’s a member of our music staff who plays the sound effect. If it’s a director’s choice that’s not in the musical score, then it’s a member of the sound department. But, in either event, the sound effects are often played through a MIDI keyboard, either situated down on stage or up in the sound center. The one here in the photo is marked up for the Tosca bells, with the numbers e.g. #11 showing the sequence in which the bells are to be played.

While bells and cannons may be difficult to sample and thus require some manual recreation, the other big sound requirement in Tosca is thankfully one that can be sampled, and now at an incredible degree of accuracy: the organ.

Although I believe that the organ bays in the auditorium were originally intended to house an organ, as with so many halls, the construction budget was exhausted before they got to the organ, and so we don’t have a house organ. All organ sounds are piped in electronically, and come from the organ console that sits up in the sound department, a long way from the stage. A member of the music staff will play the organ during the performances – here in Tosca it’s Adler fellow César Cañón. The organist has to determine the right time lag to connect with the conductor’s beat in the pit. It’s no simple task! 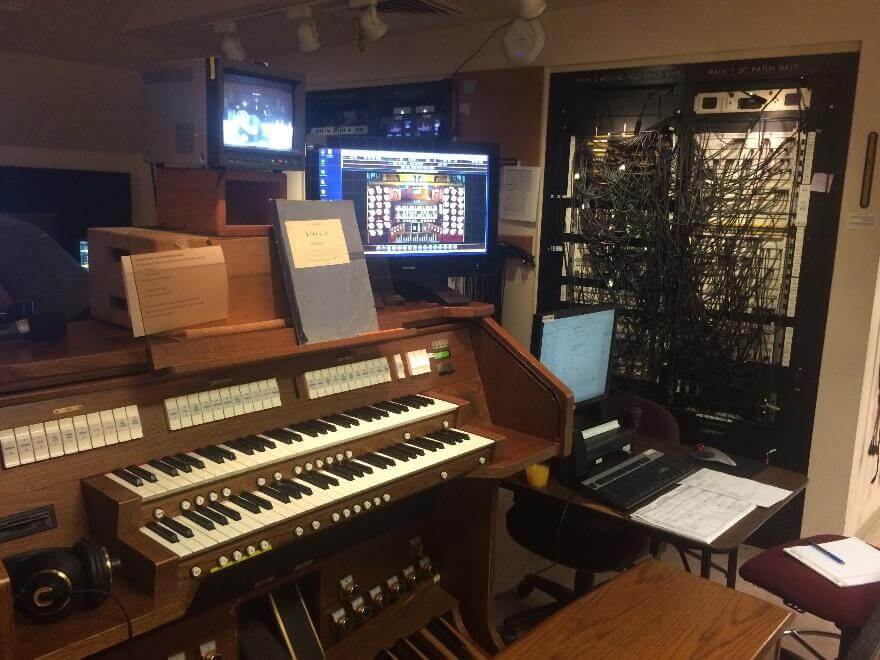 Until Mefistofele in 2013 we were just using the organ sounds that came with the organ console. But Nicola Luisotti expressed concern about the viability of those sounds and so began to hunt for other options. I’m actually an organist myself, and so I took on this project with relish. We came across a terrific company, Hauptwerk, which has dedicated itself to sampling organs from all over the world at the highest level of fidelity. They sample every note, every pipe, every ‘rank’ or type of sound in the organ, and they even record the mechanical sound of the keys being depressed and the sound of air rushing through the pipes. They have a wide variety of sample sets from small Italian baroque organs through to massive British cathedrals, and all of these can be played through any keyboard. It doesn’t have to be as elaborate a set-up as ours. It can be a small, cheap electronic keyboard – it just becomes the vehicle for the samples. Here’s an example of a home Hauptwerk set up with two inexpensive keyboards but a cathedral quality sound, but there are also examples of Hauptwerk being used in more elaborate set-ups, and then in actual performance venues like ours. Touch-screens are used to activate the stops that you would otherwise pull out on an organ for different sounds.

We own two different sample sets for Hauptwerk. The one we generally use, and are using in Tosca, is from the church of St. Anne’s, Moseley in England. It is a relatively modest parish organ with a good variety of stops/sounds. Tod has actually added some reverberation to the sample set to create a more spacious instrument. We did branch out from the St. Anne’s organ when we did Sweeney Todd. As you may recall, it begins with a massive organ prelude, and we felt that the parish organ just wasn’t powerful enough. So we added the sample set from the Father Willis organ at Salisbury Cathedral. It’s a much bigger set of pipes, and was perfect for Sweeney Todd. But it takes a huge amount of time to load into our system and comes with its own reverberation added, so is much less versatile in the theater. So we’re back to St. Anne’s for Tosca. You can listen to some examples of pieces played on the St. Anne’s organ here. 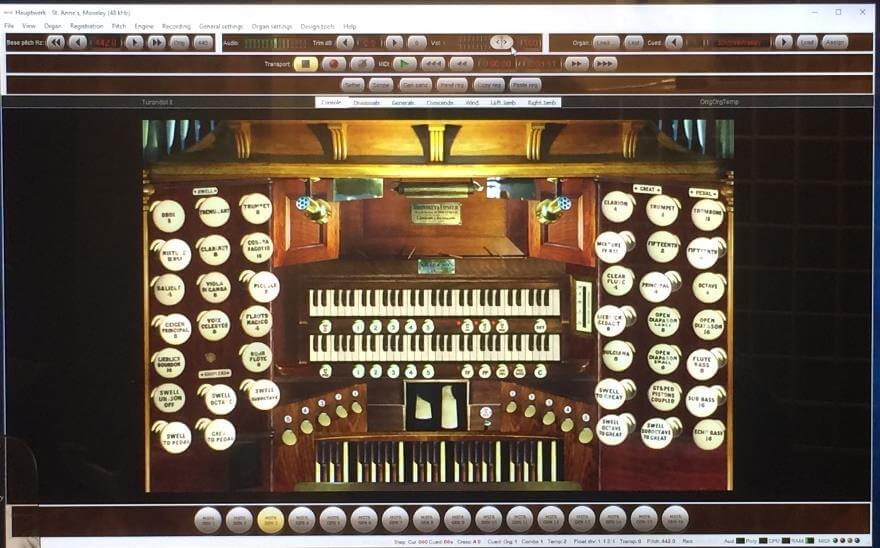 It’s amazing the versatility that these sample sets give you and Doug and Tod can even take different kinds of pipes and put them into different parts of the house. For Tosca, the organ sound is sourced to the house-left organ bay, with a little bit of the house left proscenium added in to give it a depth of presence.

As an acoustic art-form, any recorded sound has to blend perfectly with the live orchestra and singers onstage. The conductor and music staff are always actively involved in questions of sound (our Tosca conductor, Leo Hussain worked with the sound department to determine placement of the organ and bell sounds), and the nature and placement of the sound is refined as we work through the rehearsal period, particularly once the orchestra is added in the pit. In Tosca, the bells are actually a blend of the sampled bells and real tubular bells, played by our percussionists in the orchestra.

The result is a soundscape that takes us on a journey to an early morning in Rome, surrounded by the bells of the Rome skyline, and an incredible setting for the final act of Tosca. And, if you think you can pinpoint where the bells are coming from, remember that Tod and Doug are using the entire 3D space of the auditorium and able to play with sounds in space such that we’re never quite sure!