Backstage with Matthew: Stepping in for Callas

Overheard before a performance of Elektra at the Royal Opera House back in the 1960s: a grand doyenne of London society was talking with a friend and, upon suggesting that they continue their conversation at intermission, and upon finding out that there was no intermission, she exclaimed with incredulity: “My dear…an opera without an intermission?…What’s the point!”

This story comes to you courtesy of John Copley whose production of La Traviata opened last weekend. It’s one of the inexhaustible tales that John will happily share with you from his 60+ year career—well, at least one of the stories fit for publication! You can hear more of them in John’s own words in his 2010 appearance on the BBC radio program Desert Island Discs.

A wonderful member of our directorial team, Shawna Lucey, directed this revival of Traviata but we were honored to be joined for the past two weeks by John, a director whose legacy with this company and art-form is immense. John represents a unique connection to decades of legendary operatic activity around the world.

John’s Traviata opened in 1987, six productions after his SFO debut with Handel’s Giulio Cesare in 1981. Back in the 1970s then-general director Kurt Herbert Adler had been scouting in London for 10 days and found that all the opera productions in London happened to be by John—both at the Royal Opera House and English National Opera! Adler offered John a production in San Francisco but sadly the details didn’t work out and it was with Terry McEwen that John began his almost 40-year association with SFO. It’s an association that has spanned 19 productions and which led to his receiving the San Francisco Opera Medal in 2010 when he was here for Figaro.

John’s association here is eclipsed by his relationship with the Royal Opera, Covent Garden which goes back to 1945 when he appeared onstage as a teenager in Aida, Peter Grimes (the young apprentice) and Rosenkavalier (Mohammed). While in the wings he would soak up every aspect of the performances, watching great singers and great conductors like Erich Kleiber. These artists conveyed interpretations and insights directly from composers like Richard Strauss, and John has woven these insights into his stage direction ever since.

That’s one of the great things about John—the authenticity and fidelity for stagecraft that informs everything: how a singer moves on stage, how one interprets a score, how the music and drama should intersect. He recently gave a masterclass to some of the Adler Fellows and these sessions are pure gold: a chance to connect right back through the legacy of the 20th century.

John’s sense of professional rigor and total understanding pervades the directors that John has mentored through the years—the likes of Graham Vick, Keith Warner (whose Elektra is on stage), and Sir Nicholas Hytner (whose Xerxes we saw a few years ago). No matter how interpretative the staging, there is a respect in these directors for the music and the original intent—a desire to tell the story in the most powerful and compelling way possible. It’s that authenticity that led to John’s Bohème being on the stage of the Royal Opera House for 42 years and his Traviata being here in San Francisco for 30 years.

John had already directed Traviata for English National Opera before his production here in San Francisco and he had a deep-rooted fascination with Marie Duplessis, upon whose life the opera is based. Growing up, he saw a French theater troupe performing plays in French in London (no subtitles of course) and one of those was the Dumas play about Duplessis, La Dame aux Camélias. But original language was by no means de rigueur in London at that time. The Royal Opera House performed almost everything in English in the 1940s and 1950s. It was only when the indomitable Sir Georg Solti assumed the music directorship in 1961 that, at the maestro’s stipulation, everything reverted to original language. Over a recent lunch I had with John, he would sing snippets of English versions of the great operas—the marriage of music and text seared into his memory.

John lost his partner of 50 years in 2014, John Healey, and he feels the loss acutely. I had the privilege of spending time with them both while John Healey was still alive and a kinder, more caring relationship would be hard to imagine. Although it is emotionally difficult for John Copley to travel around the world without his soulmate, he is still busy at age 84. He returns to the Met in January to direct Semiramide and is creating a new Entführung aus dem Serail for The Grange Festival in the UK next summer. He teaches actively at the Royal College of Music and so generously shares his knowledge with new generations.

Oh, and the title of this article. Well, it reflects one of the supreme examples of John’s total command of the art-form, and one of his best stories. It was 1964 and John was assisting Franco Zeffirelli in London, staging Maria Callas in Tosca. “La Divina” fell sick during the last few days of rehearsal and John (a trained counter-tenor) was conscripted to fill in for her, singing in full the lead role. The press had been barred from all rehearsals but one intrepid journalist managed to get to a place where he could hear, but not see the rehearsal. The journalist reported in the London paper the next morning that he had been blessed to hear the delightful tones of Callas wafting through the Opera House! John didn’t get to take the opening night but he was rewarded with his first new production at Covent Garden.

I feel a great connection to John each time I’m in rehearsal. Back in 2010 when we were doing John’s Figaro he sketched a little period costume design on our technical table in the theater. It’s in pencil but has survived these many years. Each time I sit down in the theater, it gives me a wonderful connection back to one of the great theatrical geniuses of our time. 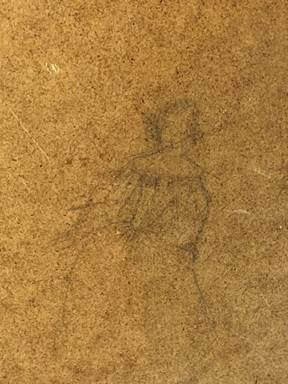