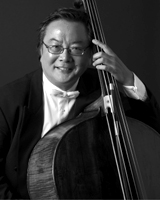 Born in Berkeley, CA in 1956 to a Japanese American family, Mr. Eshima has written over 30 works including ballets, operas, hymns, choruses, solos, chamber pieces and soundtracks. An audio recording of his first work for San Francisco Ballet, RAkU, was released in 2012 and a documentary about the ballet, Fire and Ashes: Making the Ballet RAkU premiered in 2017. His most recent major commission is Zheng, a new opera about the late Chinese-born, American mezzo-soprano, Zheng Cao. His first full length ballet, Snow White, will premiere with Carolina Ballet in March 2022.

Mr. Eshima graduated with a Bachelor's degree in Music from Stanford University and a Master of Music degree from the Juilliard School. He was the recipient of the Stanford Humanities Award and was honored by the city of Berkeley with a declaration on December 6, 2011 as "Shinji Eshima Day" for his contribution to the Arts.