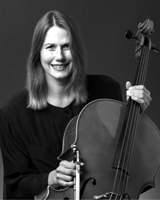 Ruth Lane has been playing with the San Francisco Opera Orchestra and San Francisco Ballet Orchestra since 1990. She received her Bachelor’s and Master’s degrees from U.S.C., while spending her summers on fellowship to the Aspen Music Festival, Piatigorsky Seminar, and the Banff Music Festival. Her teachers include William Pleeth and Lynn Harrell. She has been principal cello with the Carmel Bach Festival, and the Fresno Philharmonic. Most recently, she has joined the Temsecal String Quartet.

Ms. Lane has been heard in recital in the San Francisco Bay Area, Los Angeles, and London. Strad magazine calls her “a cellist of scrupulous intentions and dexterous manual coordination…unimpeachable intonation and admirable poise.”

She resides in the country near Petaluma with her husband and two children.