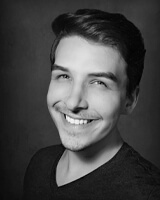 Bass Stefan Egerstrom is currently in his third year as a San Franciso Opera Adler Fellow. He made his Company debut this fall as the Jailer in Tosca, and he also performed the role of Second Prisoner in a new production of Fidelio. He was a participant of the 2019 Merola Opera Program, performing in the Schwabacher Summer Concert and the Merola Grand Finale. He recently portrayed Hunding in Wagner’s Die Walküre with Queen City Opera. In 2018 he made his role debut as King René in Tchaikovsky’s Iolanta with Queen City Opera.

Egerstrom was seen as Sarastro in Die Zauberflöte, Siroco in L’Étoile, Carlino in Don Pasquale and soloist in Bach’s Johannes-Passion. As part of the Opera Fusion: New Works initiative between Cincinnati Opera and CCM, he performed in workshops of Ricky Ian Gordon’s Morning Star and Gregory Spears’ Fellow Travelers. Other operatic roles include Don Basilio in Il Barbiere di Siviglia, Dulcamara in L’Elisir d’Amore, Dr, Grenvil in La Traviata and Kecal in The Bartered Bride.

Egerstrom trained as a young artist with Des Moines Metro Opera. He received his bachelor’s degree in vocal performance from Lawrence University and his master’s degree in voice from The University of Cincinnati College-Conservatory of Music.