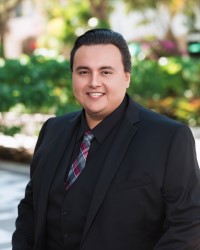 Moisés Salazar is a Mexican-American tenor known for his rich romantic sound and broad range of vocal color. This season, he returned to Palm Beach Opera as Remendado in Carmen and as the Nemorino cover in L’elisir d’amore, as well as performing the 1st Armored Man in Die Zauberflöte with the Merola Opera Program.

During the 2021-2022 season, Moisés covered Buckley in The Tongue and the Lash and Gherardo in Gianni Schicchi at Opera Theatre of St. Louis. He also appeared as Tebaldo in I Capuleti e i Montecchi, Rodolfo (cover) in La bohème, both 1st Priest and 1st Armored Man in Die Zauberflöte, and Tamino (cover) in Die Zauberflöte all with Palm Beach Opera.

2020’s engagements canceled due to Covid 19 included Elder Gleaton in Susannah, and Frank in Tobias Picker’s Awakenings at Opera Theatre of St. Louis.