Backstage with Matthew: The Immersive Ring

Today we raise the curtain on what promises to be an extraordinary presentation of Wagner’s epic Ring Cycle. I couldn’t be prouder of the company and community that enables artistry of such soaring impact, and I am very excited to share this Mount Everest of human creativity with you.

This production of the Ring by Francesca Zambello has been invested with a number of monikers from “The American Ring” to “The Green Ring” to “The Feminist Ring”, and I’m adding another moniker in my header here: “The Immersive Ring”. It is really the intersection of incredible projection imagery along with music, scenery, costume, props, sound and lighting, that allows audiences to immersive themselves deep into this story, into a world constantly in motion, constantly unfolding, constantly drawing us in.

The world of video and projection now infuses every surface and aspect of this Ring. Not only do we have front projection (for example the opening sequence of Das Rheingold) and rear projection (e.g. the sunrises, the world of the Gibichungs, the forest in Siegfried), we also have the floor. New and changed from 2011, the floor itself is now one big video surface—an interplay of hundreds of LED lights that is constantly in motion, allowing for a seamless world of color, light and energy that surrounds and envelopes the artists and the story telling.

This completely immersive visual world has allowed the production to fully create a world of color leitmotifs (or building blocks) that are particularly noticeable at the end of Götterdämmerung as the musical leitmotifs of the Ring come together in rapid succession as characters and themes and ideas all come to a head. At this point, we now also quickly move through a visual panoply of colors as we morph from the world of the rainbow (Valhalla) to purple (Erda), grey clouds (Wotan), gold (the gold!), and many other colors until we reach the glorious blue sky that finally brings peace and resolution to the world. This kind of color interplay was not possible in quite this way in 2011 but is now an amazing way to finish the cycle.

The projections, particularly those of Rheingold and Götterdämmerung, are the artistry of S. Katy Tucker, one of the premiere projection designers working in opera and theater today. Her first paid job was actually on this Ring cycle in its earlier incarnations. Katy had been working as an intern at the Metropolitan Opera, helping set up the technical tables in rehearsal. She was trained as a visual artist, but decided that was too solitary a life, so thought that the world of theater could be an interesting application of her skills. While interning at the Met, she struck up a conversation with Francesca Zambello who immediately spotted a passion and a focus, and hired Katy as an assistant to then-projection designer on the Ring, Jan Hartley. Francesca understood the huge potential intersection of Katy’s passion for art and theater, and unlocked an incredible possibility, the flowering of which we will see in this Ring.

That spirit of camaraderie, of partnership, of the team, is so important to Katy, and she loves to be in the trenches with her colleagues in theaters like SFO. She characterizes these processes as intense relationships for short periods of time where you need to trust and rely on fellow artists and technicians. You have to respect each other, maintain a sense of humor, and want the very best together. One of the people that she works with particularly closely is Erik Docktor, who is Katy’s technical right hand. He is the person who takes all of her designs, ‘ingests’ them into the media server, and morphs and adapts them to Katy’s artistic needs. She travels wherever she can with Erik—they have developed a shorthand that allows them to work quickly and symbiotically.

The process of projection design begins with listening and reading. Katy absorbs the libretto and listens to the music over and over again. She played piano growing up and, from her visual artistry, very clearly has a sensitivity for the musical arc. After reading and listening, she then thinks about visual artists who have a connection to the story that she is trying to tell (for example, Albert Bierstadt for Rheingold and Anselm Kiefer for Götterdämmerung), which she adds into her palette of inspirations.

From there, Katy creates a cue sheet—a storyboard if you will—that maps out when certain things will happen in a projection design. It’s like a personal diary from which comes small video clips of content. These video pieces are generally done in Adobe After Effects and Cinema 4D. Once created, they are transferred to Erik who imports them into our Mbox video server—a powerful software and hardware combination that allows videos to be morphed, stretched, recolored, slowed down and layered in very quick and efficient ways. If you think of a movie as a linear sequence of frames, the media server allows you to work in an additional dimension without having to go back and reorder those frames. In something like live opera, where you have to build in contingency loops to allow for different timings in the pit, this kind of server is essential.

Katy delves deep into imagery and inspiration for her designs. In fact, for this particular Ring she spent a week in Death Valley, driving around in a jeep to get imagery for the big transition sequences. She notes wryly, “things would be a lot easier now with drones.” 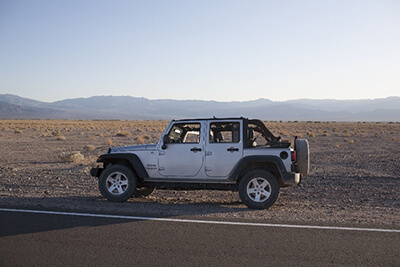 One thing that amazes me about the video server, is that there is no imagery in the actual server system. It’s all a series of raw numbers and that is often the way Erik will think about images. Although he has support monitors that show the imagery, he is predominantly dealing mathematically with the material. It’s amazing to see him in action! 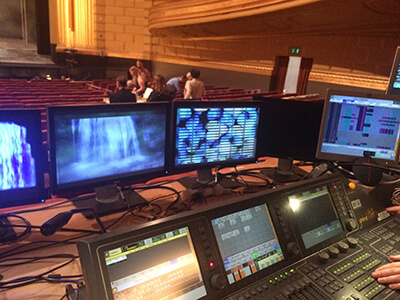 Each of the video clips has a number and a title (often humorously created), and it’s actually then the stage managers (Darin Burnett and John Coleman) who call for those clips to change, based on where we are in the score. In that respect, a projection cue works very similarly to a lighting cue.

The projection team (sitting in the electrical department of the Opera House crew) is then completed with Maria Mendoza, who has over 30 years’ experience with the company and is also a crew head at the Curran Theater, and who oversees the whole process, ensuring that the time and resources needed are included in the overall technical plan, and the engineers like Russ Adamson. The engineers take care of all the projectors (we have two front projectors and four rear projectors for the Ring), determine placement and focus of the projectors, select and maintain the projector lenses, and run the media server once we are in show mode. It’s a small, highly skilled, and deeply committed team, and their work station (which I lovingly call “mission control”) is just in front of me in the theater during rehearsals.

It’s very tempting for people like me who are watching rehearsals and giving notes, to think that projections can be easily changed and morphed, and one of the things that creative teams need to determine are the right pacing for changes in the world of projections. As Katy notes, the projections are an integral part of the overall design, fully connected to all of the other design elements, and there is a wonderful artistic integrity that Katy and her team brings to bear. Katy is an amazing colleague who is always happy to take on ideas, converse about possibilities, be fully dedicated to the integrity of the design, and find the very best visual world for the opera. It’s a joy to work with her, and a joy to see her work unfold onstage.

As you are swept up in the visual sumptuousness and color palettes of this Ring Cycle, give a thought to the dedicated projection team who has done so much to bring this “Immersive Ring” to life in the most spectacular of ways. 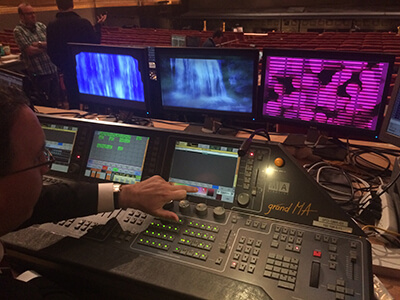 Here’s to three tremendous cycles of the Ring ahead of us!