As we enter into this third and final journey down the Rhine, I thought what better lens to peer through than that of the pyrotechnics of the Ring. The Ring calls for an enormous array of special effects to create the worlds of heroes, gods and monsters and Wagner himself was very preoccupied with the importance of effects (see image below). Two of the biggest effects in our Ring are Brünnhilde’s fiery resting place in Walküre, and the conflagration of the world at the end of Götterdämmerung. Fire is a vital and very exciting part of telling the story of the Ring.

Fire in the Ring is overseen by two incredibly experienced members of our stage crew in the electrics department: Geoff Heron who is in charge of pyrotechnic effects (sparks, flashes, explosions, etc.), and Jim Eldredge who is in charge of the live flames onstage. Both gentlemen have gone through extensive training and certification, being licensed at the federal, state and local levels. Federal and state licenses cover the individual, and local licenses cover each event.

The most intense of the pyrotechnic effects in the Ring is the death of Fafner, our larger-than-life trash compactor/dragon who is protecting the gold. Siegfried battles Fafner and, in this production, that means taking down a two-ton robot. You can see more photos of Fafner here, and Geoff Heron is responsible for all of those fabulous sparks that come off the dragon each time there’s a sword blow. Each of these spark effects is triggered by Geoff using a handheld remote control from which he fires a small receiver, capable of taking 6 charges. The charges set off a “squib,” a small firework intended to give off sparks rather than explode. The squib is a mixture of titanium and black powder, and there are twelve of these on Fafner, six on his body and six on his head, the latter for the final death sequence. Geoff has a monitor that shows the battle scene and he ensures that the squibs are set off at exactly the time Fafner is struck by Siegfried. 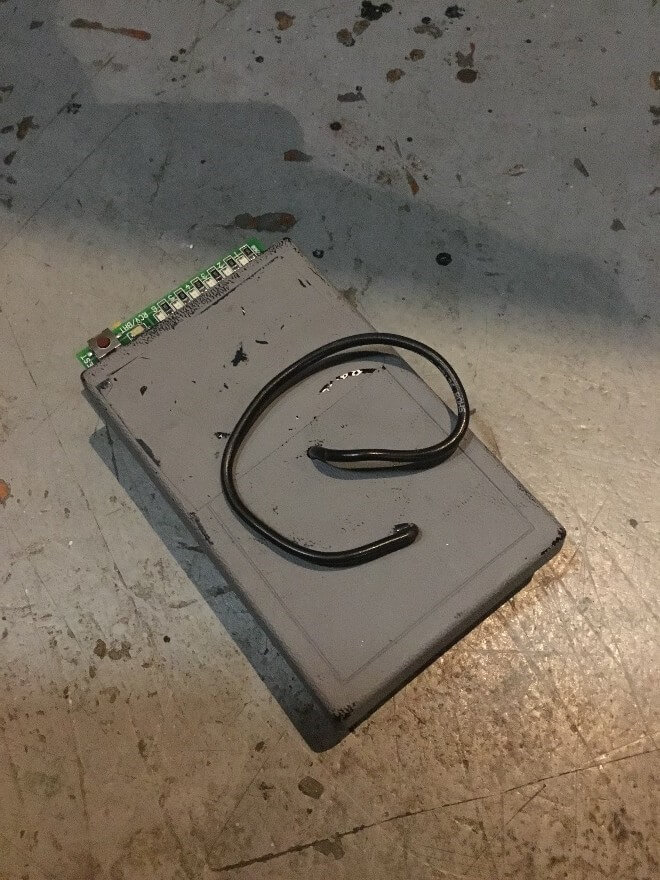 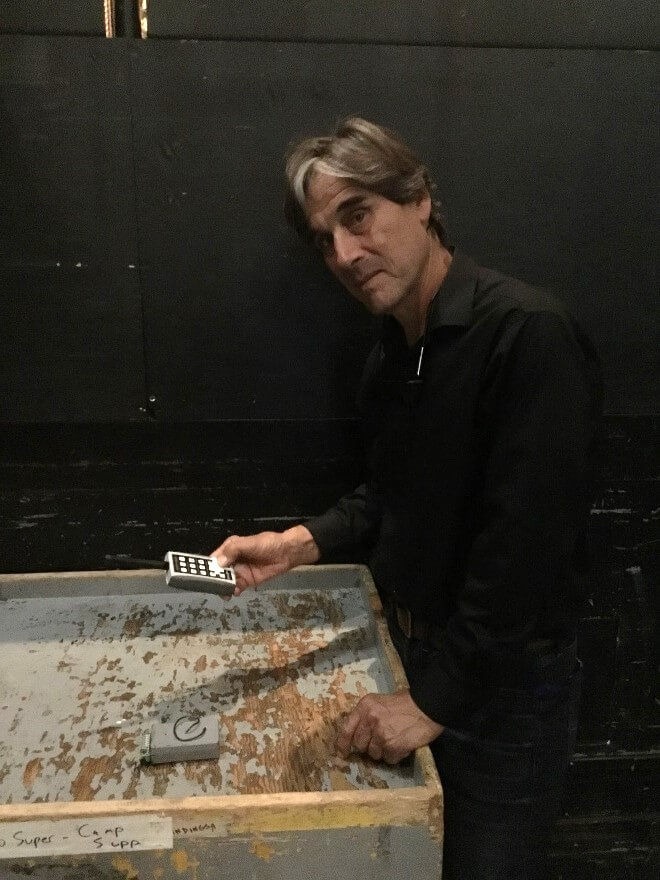 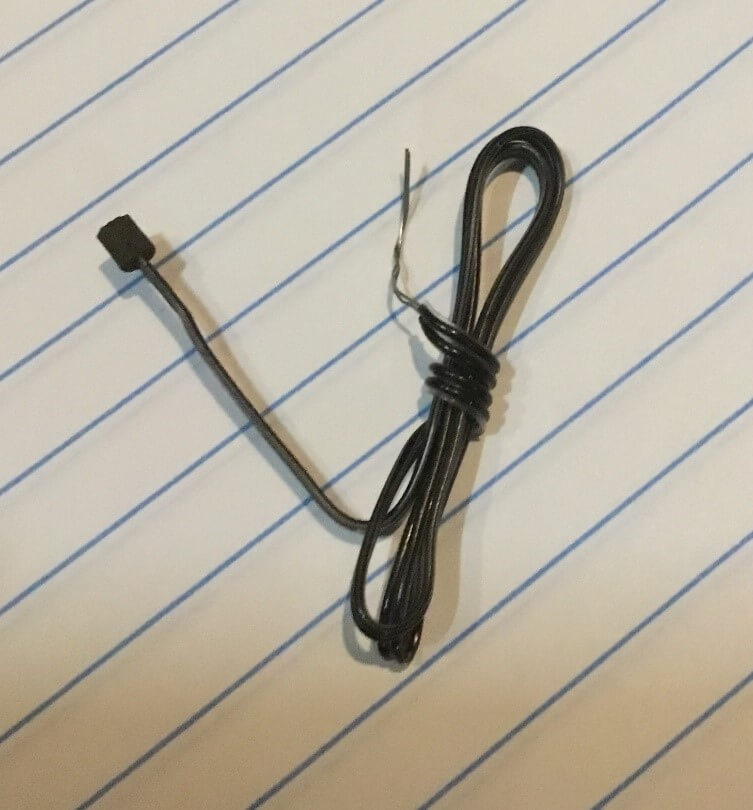 This spark mechanism is very similar to the sparks that are triggered in Götterdämmerung when the Norns’ cables break, but are completely different from the sparks that emanate from Siegfried forging the sword Notung. Those sparks are old-school, coming from a flint and a grinding wheel!

Geoff Heron began at the Opera during the Adler years, before leaving to work in special effects in the movie world on films such as Pirates of the Caribbean, Mission Impossible, Indiana Jones and Star Wars. He is now back with the Opera and, although the scope of the explosions may not be quite as large as in Hollywood blockbusters (he tells me that they would build safety bunkers on the film sets!), there is still a critical role that pyrotechnic effects play in punctuating a work like the Ring, and the live element adds a particularly critical focus.

Geoff and Jim tell me that the fire at the end of Walküre is tied for the biggest fire effect with that in Tannhäuser from 2007; the latter was not as much fire volume, but it did go on for 20 minutes longer and had two principals inside it the whole time. But the Walküre fire is very significant. 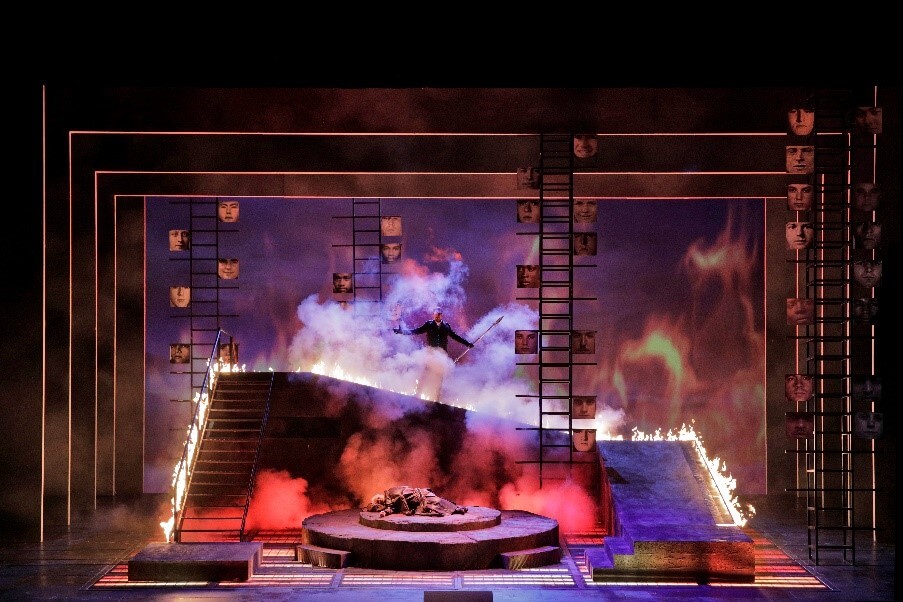 Safety is paramount for all pyrotechnic and fire effects, involving many steps from the design of the effects, to the permitting through the fire department, to flame proofing sets, to adding fire retardant to any costumes that come within 10 feet of the fire, to having fire-watch personnel on hand. The fire watch are crew members trained in fire safety and suppression. For the Walküre fire, there are five crew members on fire watch, armed with fire blankets and fire extinguishers just in case. In addition, the fire department sends a fire marshal who is on hand during any production that uses fire and who checks all the connections before the performance (using the good old soap and water test). And, for those operating the fire effects, if they are not 100% assured of safety in the moment, they will abort.

I was surprised to learn from Jim that the fire in Walküre only uses 4 propane bottles—the kind you would use for your gas grill. The fire at the end of Götterdämmerung only uses one bottle. 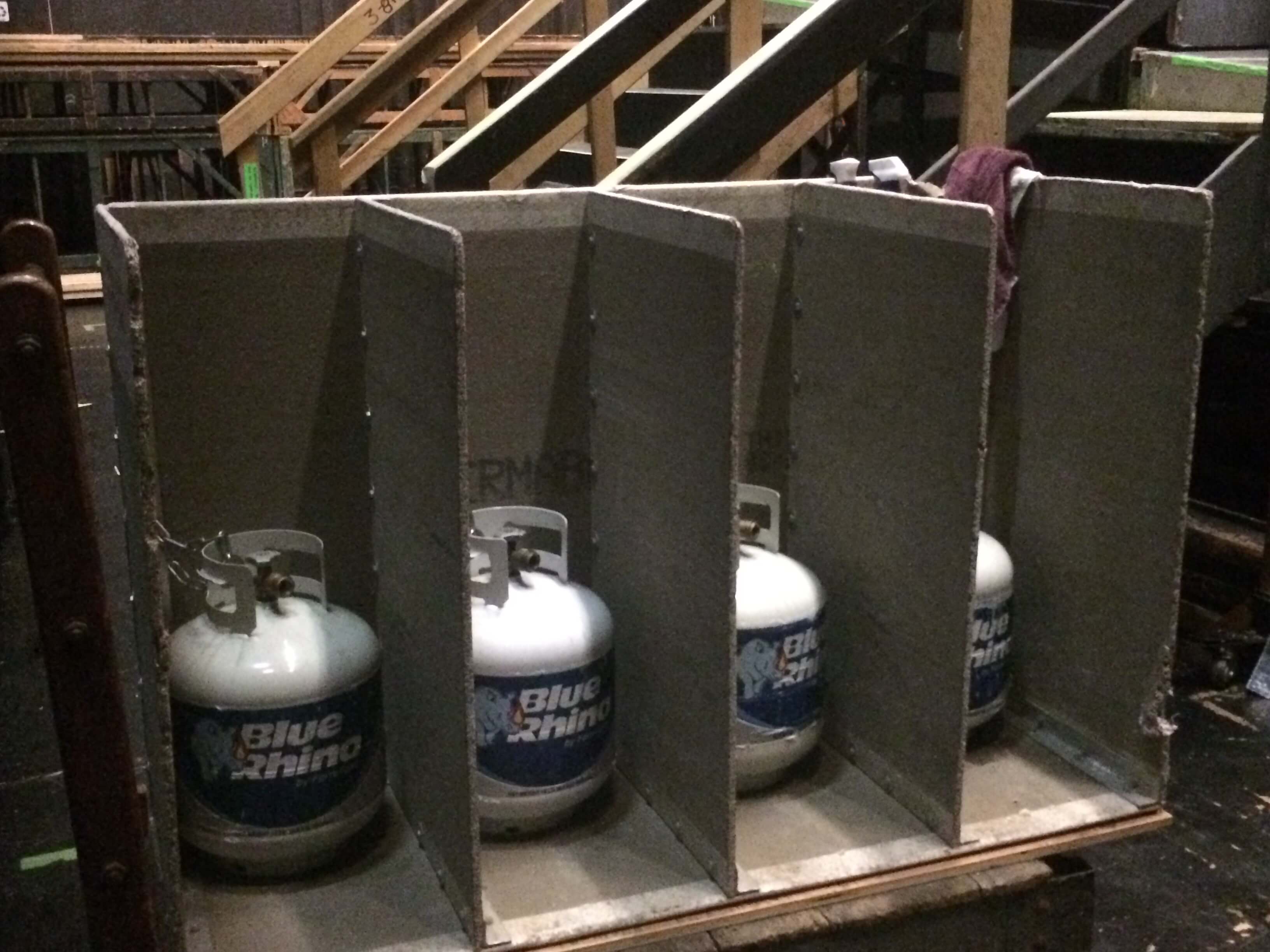 However, before getting to the flame bars, the gas goes through a process quite unlike your gas grill. First, the electric ignition box lights the pilot. Only when that pilot is lit by Jim and confirmed as lit by the computer, is Jim able to open the gas lines, ensuring that gas cannot escape. The gas then goes through a diaphragm regulator which sets the overall level of the flame for that particular effect—Walküre both demands more fire and the gas also has to travel up higher vertically, so the pressure is that much greater. An electronic proportional valve allows more nuanced regulation of flow, such as when the fires swell in Walküre after Wotan walks through them. And then come the accumulators: four large tanks under the stage deck that ensure that the propane is gaseous by the time it reaches the firebars and not still liquid. This is the major difference from your home gas set-up, and allows far much more fire from much less propane, maybe 4 x 5 gallon tanks rather than 4 x 100lbs tanks otherwise (about 5 times as much total gas). The accumulators are only used for the big fire effects. Things like the small downstage fire at the start of Walküre are fed directly from the 5-gallon propane tanks.

Jim’s predisposition for the mechanics of fire creation is somewhat genetic. His father is an HVAC specialist, and that kind of plumbing is completely the basis for the fire plumbing that Jim does on stage. As with Geoff, much of Jim’s specific training was on the job here on the Opera stage, and also through the Union, Local 16 of the IATSE. Jim speaks with great fondness of his training with Peter Stolz, a long-time pyrotechnic specialist at San Francisco Opera. Jim had worked on the television pilot of Nash Bridges with Peter.

Jim and Geoff’s work comes together in wonderful synchronicity during Rheingold and the disappearing effect of Alberich in Niebelheim. These moments are a simultaneous coming together of fire, pyrotechnics, and liquid nitrogen (liquid nitrogen is used for all of the billowing smoke in the Ring). For this moment, Jim sets up the fire effects—a direct feed from a propane tank that uses a continual spark to ignite the gas when opened, thus causing the little mushroom fireballs. Geoff triggers the charges to coincide with the flash-pot, and then the carpentry crew activates the trap that takes Alberich down under the stage. As with so many moments of the Ring, it’s an incredible symbiosis of multiple elements coming together in one impactful whole.

Geoff and Jim’s most memorable fire moments? Geoff’s is Act 2 of La Gioconda from 1988 and the battle on board a ship that involved huge amounts of fire and flame. Jim’s is the Tannhäuser tree from 2007 which sets on fire but then had to extinguish immediately in one go. 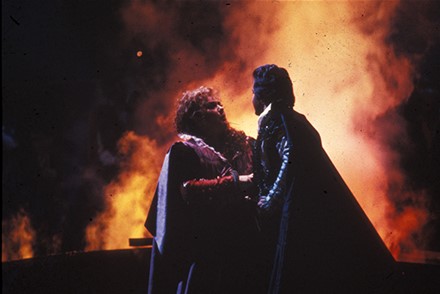 Fire and special effects onstage are two of the elements that give us that sense of total immersion into something very real and very powerful. The experience behind our pyrotechnics work is immense and Geoff and Jim ensure that we see the most spectacular effects in the safest possible way.