London’s Royal Albert Hall was packed that starry spring night, as performers from Frozen the musical twirled across the stage and dancers kicked up their heels to Anything Goes.

It was April 2022, and the Laurence Olivier Awards, one of the highest honors in London theater, was being presented after an absence of three years, due to the coronavirus-related shutdowns.

The auditorium crackled with energy—so much so that when Harry Potter star Fiona Shaw stepped into the spotlight, golden envelope in hand, to announce the winners for excellence in opera, she faced a roaring wall of cheers. 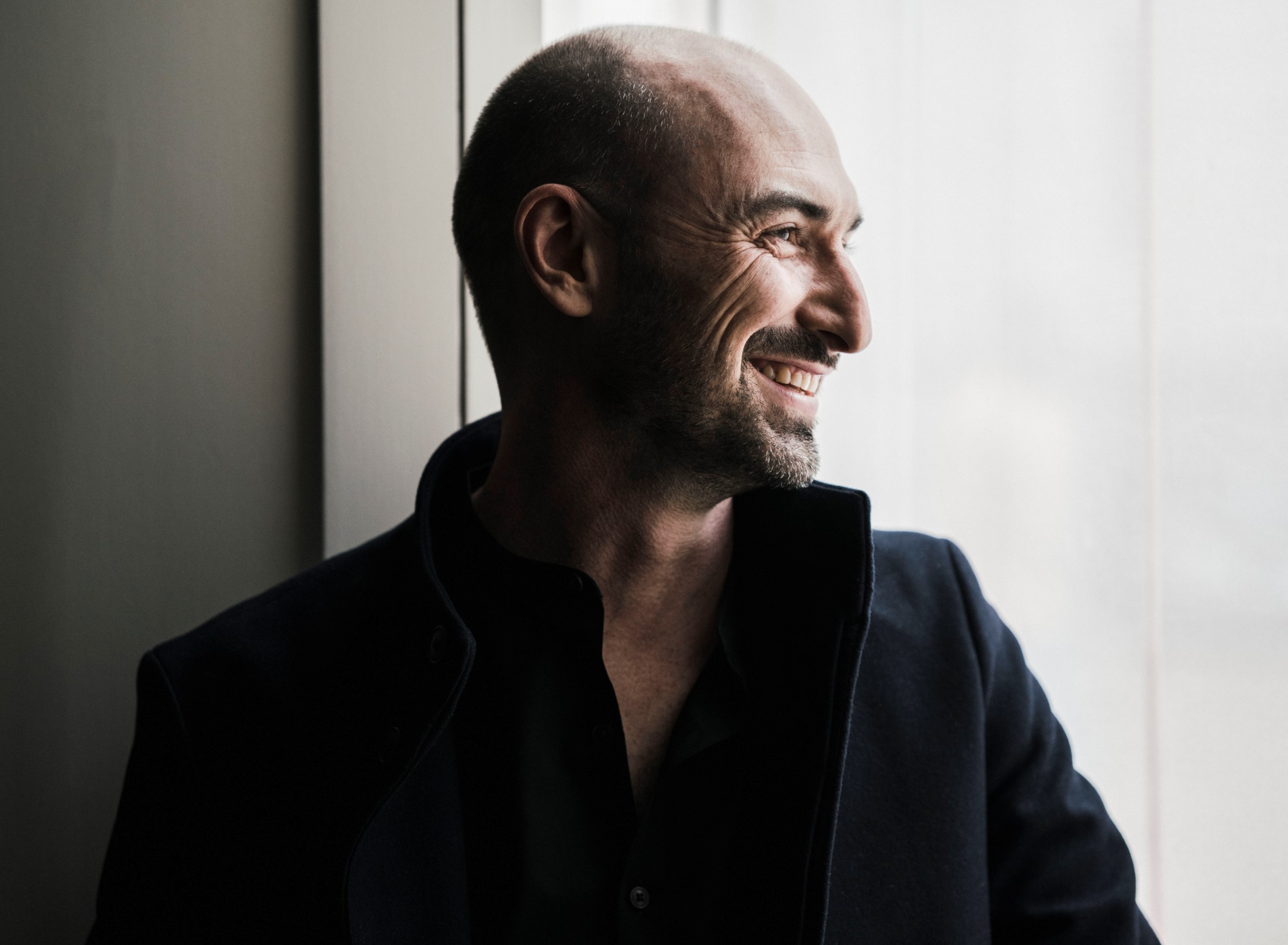 “Steady. I’m not going to sing,” she deadpanned as the crowd continued to hoot and holler. And with a snap of the envelope’s seal, a new name was baptized into the universe of Olivier winners: Irish conductor Peter Whelan.

He and the organization he heads, the Irish Baroque Orchestra, were honored in the category of Outstanding Achievement in Opera. For the multi-hyphenate Whelan, it was validation for a lifetime spent in music.

Whelan has been playing piano and singing since he was a child. As an adult, he developed a successful career as a bassoon player. And now, as a conductor and artistic director, Whelan leads orchestras and ensembles around the world.

He conquers yet another stage this fall with a debut at San Francisco Opera, as part of the Company’s 100th Season. There, he’ll conduct an opera he knows well: Christoph Willibald Gluck’s reform opera Orpheus and Eurydice. Whelan has conducted it previously at the Blackwater Valley Opera Festival and the Irish National Opera.

Orpheus and Eurydice tells a story plucked from antiquity. It recounts the Greek myth of Orpheus, a musician so grief-stricken at the loss of his wife that he braves the underworld to rescue her from death itself.

But Gluck’s music gives the tale extra edge: The composer married the opera’s music and drama together seamlessly, in a way that was revolutionary for the 1700s. It would reshape opera from that point forward.

In a new video interview, Whelan shares why he’s attracted to Gluck’s score—and how he sees the future of opera in San Francisco Opera’s cast.

SAN FRANCISCO OPERA: You grew up outside of Dublin. What was that like? And when did you start to notice you had a knack for music?

PETER WHELAN: As you can probably tell from my accent, I'm Irish. I was born in Dublin and I was brought up in a town called Celbridge, which is just outside. Celbridge is famous for Castletown House, a beautiful 18th-century house. Well worth the visit if you're ever there.

As far back as I can remember, I was always hungry for music. I had piano lessons with a neighbor of mine. I used to love singing in choirs as a child, but I hadn't really decided to do it professionally until much later, when I studied at the Royal Irish Academy of Music and at Trinity College, Dublin. I think, about that point, I decided, "Yeah, I'll give this a go.”

SAN FRANCISCO OPERA: Did you like opera right away—or did that come later?

WHELAN: My first experience of opera didn't come until much later. But I do remember at my first school that the teachers used to put on a musical each year: Fiddler on the Roof, My Fair Lady, West Side Story, that kind of thing. And we, as students, were always drafted in to help out in the chorus and to make props and all the rest.

And I remember, from the very beginning, I was hooked. And I also have a really strong memory of hearing some of my teachers singing in three-part harmony for the first time.  I was transfixed. It was like the gates to heaven were open and I knew this was something I had to pursue.

SAN FRANCISCO OPERA: Tenor. Bassoon player. Keyboardist. Composer. And now conductor. You’ve worn a lot of hats in your career. How did one career lead to another?

WHELAN: I always wanted to be part of music-making in any way I could. As a child, I was singing and playing the piano, but then, once my voice changed, I missed making music with other people. And I decided that maybe I should play an orchestral instrument.

I'd left it a little bit late, but my piano teacher ran a scheme for getting people to play orchestral instruments that were less usual. And she gave me a few choices of instruments I could play.

I really wanted to play the oboe. But she said, "Maybe you shouldn't do that." Her husband played the oboe. Reeds are a nightmare. "Instead, why don't you play the bassoon? It's a bit more easygoing." So I started playing that pretty quickly. I started playing with youth orchestras and then professional orchestras.

Eventually I went to Basel in Switzerland to study a little bit. I used to accompany singers and other instrumentalists to make a bit of money when I was there. That led me on to playing in professional orchestras. Played in the Scottish Chamber Orchestra for many years. Also the Mahler Chamber Orchestra and many period instrument ensembles as well, like the Orchestra of the Age of Enlightenment and the Irish Baroque Orchestra.

And then about the last 10 years of my career, I suddenly became very interested in music from Ireland, music from where I was from. And I realized that nobody else is going to do this music unless I do it myself. So that was my first impetus for becoming a conductor and starting my own group called Ensemble Marsyas. And we discovered and explored a lot of music from Ireland in the 18th century.

SAN FRANCISCO OPERA: How has being a singer and being an orchestra member shaped your conducting work? What “dos and don’ts” did you learn from being under the batons of others?

WHELAN: There's a certain amount of karma, having been an orchestra musician and now being a conductor. It's a little bit of poacher-turned-gamekeeper.

But having worked in orchestra, I realize that the best leaders tend to be those who have a plan—who can enable and inspire their musicians but still leave a bit of space for give-and-take with the musicians. And this is what I try to achieve when I'm conducting.

SAN FRANCISCO OPERA: Who has been the biggest influence in your career as an artist? Who has inspired you?

WHELAN: I count myself very fortunate to have worked with so many inspirational musicians over the years.

Two who spring to mind immediately include my Italian bassoon teacher from Basel, Sergio Azzolini. He taught me the importance of making your instrument sing and breathe—even an instrument as unwieldy as the bassoon. He also taught me how to find inspiration from the other orchestral parts and from the bass line and also how to make a bass line really pop.

Another huge influence was British scholar John Butt, who's also a conductor.  He's a genius who wears the information lightly. He can impart very complicated ideas, using fun and an imaginative imagery that can speak to everybody. And I find that really inspirational.

SAN FRANCISCO OPERA: You look absolutely blissed-out when you conduct. What’s running through your mind when you’re on the podium?

WHELAN: There's so much to think about when you're conducting—so many plates to keep spinning. It's what a friend of mine calls “ever-whelmed,” which is one step more intense than overwhelmed. So much is happening that there's no time to worry about any one thing in particular. It's such a privileged position.

You get to see the musicians underneath the stage in the darkness, super-focused and intense, and then the bright lights on stage and the singers running around acting. And then of course the audience behind, what their expectation is, and you feel the energy from them too.

It's a very intense experience, but just occasionally you hit this flow state where everything is happening as it should. And at that moment, there's nothing to do except smile and enjoy it.

SAN FRANCISCO OPERA: In your opinion, why isn’t Baroque music performed more? It can be a rarity on mainstream opera stages.

WHELAN: Perhaps one reason why Baroque opera isn't performed so much on the main stage is to do with the scale. In the 18th century, we had much smaller, more intimate theaters, and there's a smaller number of musicians generally involved on stage.

Another reason is the complication of the da capo aria. That means that you have these two sections, A and B, and then the A section is repeated at the end. That's quite difficult to direct and to make drama happen. But in fact, it can be used in a very brilliant way to see how a character's psychological state develops.

SAN FRANCISCO OPERA: When you’re not at work, how do you kick back? What are your favorite pastimes?

WHELAN: When I'm not working, I love to relax by walking, by going to the gym, swimming, listening to podcasts, going to the library, sleuthing around, looking at old scores, trying to find some special buried treasure like Indiana Jones.

SAN FRANCISCO OPERA: This isn’t your first production of Gluck’s “Orpheus and Eurydice.” What draws you to the work? What do you love about it?

WHELAN: I've conducted Gluck's Orfeo ed Euridice a number of times before. It's a piece that I really love.

It's a reform opera where Gluck and his librettist Calzabigi are coming together to make something new, to push aside everything that's happened before. And their plan is to make an equality between dance, text, singing and the music.

So everything comes together on an equal footing. And I find that really miraculous. There's so many beautiful, ethereal moments throughout the whole piece, and it just flows by. I really can't wait to get going on it again.

SAN FRANCISCO OPERA: How would you like to see the opera industry grow and expand?

WHELAN: When it comes to finding inspiration for our opera industry and how to develop and grow it, I think we need look no further than our very own Orfeo, [countertenor] Jakub Orliński. What an inspirational person. He can speak to all different kinds of audiences, young and old—a beautiful consummate artist but also able to dance, skateboard, parkour, you name it. I think somebody like him really is the future for opera.

See conductor Peter Whelan in his San Francisco Opera debut in Orpheus and Eurydice—opening November 15, 2022—and follow along on his adventures on social media.