'I Went With the Way of Fate:' Bass-baritone Gordon Bintner on Discovering Opera

The way Gordon Bintner sees it, he was always meant to be a performer. But the question was what kind.

He had a knack for jazz drumming. For singing. And for dance of all kinds—ballet, tap, modern, jazz, you name it. But in an odd twist of fate, what it added up to was a career in opera.

“It’s interesting. Those early experiences, you never really know how they’ll serve you in future,” Bintner muses in a recent interview with San Francisco Opera.

The Canadian bass-baritone, soon to make his San Francisco Opera debut in the Tchaikovsky drama Eugene Onegin, sees the roots of his present success in those early passions.

“Now I feel grateful to have studied dance, because I feel a physical comfort on stage,” he explains.

“Similarly, having been a drummer and a percussionist throughout school, I’m very rhythmically inclined. So in some of the more demanding modern music I come across, I suppose I have an advantage in that sense, because much of it is quite difficult rhythmically. I’ve always had a solid inner pulse.” 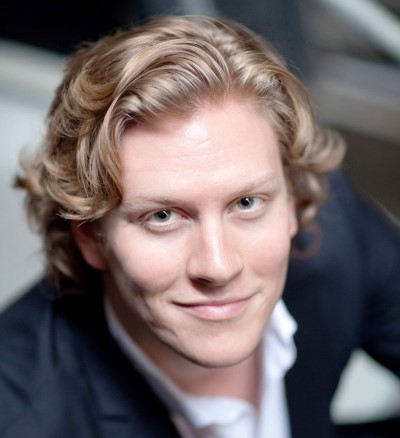 Finding Acceptance through Dance and Friendship

But arriving at that place of comfort and self-awareness was an evolution for Bintner, who grew up in Regina, the capital city of the Prairie province of Saskatchewan.

The son of an oil worker and a school teacher who became an art consultant for the local board of education, Bintner remembers his house being full of music.

His father played the piano. His mother sang. And Bintner, the youngest of five, learned harmony from her and watched hungrily as his older sisters took lessons for singing and dance.

Gordon Bintner on the set of Eugene Onegin

“I always wanted to be doing what they were doing. They were my cool older siblings,” Bintner says with a laugh.

When they would sing, he would sing too. Bintner says he couldn’t help it. “They’d be practicing their pieces at the piano, and I would learn them, just having listened a few times. I would just mimic what they were doing.”

It was by following in his sisters’ footsteps that Bintner found himself immersed in dance. Their dance company had started an all-boys class for ballet, and the older girls in the company were asked to recruit their younger brothers.

“Joining the dance company as a young boy, it certainly wasn’t the most common of paths,” Bintner recalls, but he felt supported by the bond he formed with the other boys in the group. “I did feel like I belonged to a club within the dancing community.”

Still, as a child, Bintner remembers being skittish about dancing for the first time at a school assembly. The friends Bintner made playing basketball and volleyball at school had never known him as a dancer, even though—once he left campus—dance took up hours and hours of his extracurricular life.

“I was nervous to perform for those sorts of peers,” he remembers. What would they think of his after-school life as a ballet dancer?

“I was actually quite surprised,” Bintner says. “Having seen it, they thought it was incredible.”

‘Magnifying’ the Intimacy of Art Song Through Opera

By the time Bintner reached university, he had narrowed down his passions to two avenues: vocal performance and jazz drumming. He applied to Montreal’s prestigious McGill University for both. Its voice program accepted him.

“I went with the way of fate,” he explains. “The decision was made for me, in a way. And I have to say, I’m glad it was because it’s, of course, what I was meant to do.”

But even as a budding professional, studying classical voice at one of Canada’s top universities, Bintner had precious little exposure to the art form that would become his career.

“I didn't really know about opera to be honest. And it was only in my first year of university that I was exposed to opera. And interestingly, I wasn't involved in the operas at university for the first couple of years,” he says.

Instead, Bintner fell in love with art song, a genre that typically sets poetry to music and is often performed alongside a single pianist. While other voice students studied for roles in the opera theater, Bintner found himself parsing verses and dissecting text, under the tutelage of his mentor Michael McMahon.

Eventually, across the seven years he studied at McGill—first as an undergraduate, then as a master’s student—Bintner’s love of art song led him to try opera, too.

“Weirdly, my experience in opera—to start out—was through my performing, not so much as a spectator,” Bintner says.

The vastness of opera seemed a far cry from the intimacy of the recital hall, but Bintner quickly found that the techniques he used in art song translated well to the opera stage. He found a “muse” in the way that English baritone Thomas Allen brought nuance and depth of character to his opera performances.

“In a way, it’s the same art form. We’re presenting it [opera] on a larger scale and with orchestra and costumes and a mise-en-scène, but I think, at the root, they come from the same seed, you know?”

Bintner rehearsing on stage at the War Memorial Opera House

Bintner describes his approach to opera as “magnifying” what he loves about art song: It’s the same intimacy, just presented on a larger canvas.

“I think one of the most special things you can give to an audience is a very delicate and vulnerable and intimate moment for them to ponder,” he says. “They want to see those moments on a grand scale, but they have to be real human emotions and experiences that you’re expressing.”

After a summer with San Francisco’s Merola Opera Program and a stint in the studio ensemble at the Canadian Opera Company—where he met his wife, soprano Simone Osborne—Bintner took a professional contract in Germany, where he performed with Oper Frankfurt.

He estimates it took “a 10-year training grind,” from school through his young-artist programs, to reach that level of his professional career.

But the transition abroad was, at times, a difficult one. Bintner remembers struggling to buy laundry detergent in a foreign language, not sure what the labels on each bottle said. And then there was the fast pace of the European opera season.

“In Frankfurt, they produce something like 250 performances a season. So there are many, many, many operas happening all at once,” Bintner explains. “Often you’d be performing in one show or two shows and rehearsing a third.”

It was an exercise in stamina, and each new production brought new challenges. But Bintner credits one person with helping to weather all the changes.

“I moved to Germany with my lovely wife, so we had each other throughout the experience and we could really lean on each other in this foreign place. We always had that piece of home with us in each other, throughout those trying or uncomfortable situations.”

Gradually, Bintner learned German, and he found that the busy schedule allowed him to grow as an artist. One night, he might be performing a character as recognizable as Figaro on the Frankfurt opera stage. The next, he could be playing a Czech king in the little-known prison-break opera Dalibor or a possessive count in the tragedy Der Ferne Klang.

“There’s a lot of beautiful music out there that is not in the typical, standard repertoire. So it was lovely to be exposed to a lot of that,” Bintner says.

Performing in lesser-known operas also landed him in unexpected circumstances. For the Czech opera From the House of the Dead—the last ever composed by Leoš Janáček—Bintner found himself stripped down to his underwear and locked in a glass box for most of the show. He numbers that performance among the wildest he’s ever given.

“The more crazy productions you do, the less surprised you are when it comes time to do something crazy elsewhere. You're just preparing yourself for a lifetime of being asked to do strange and wild things on stage,” Bintner says.

Returning to a Classic Production of ‘Eugene Onegin’

Now, after five years with Oper Frankfurt, Bintner has transitioned to full-time freelance work—and he’s kicking off his 2022 fall season with a major company debut. He performs for the first time with San Francisco Opera as the company celebrates its 100th season with a production of Eugene Onegin.

Based on a novel written in verse by Alexander Pushkin, Eugene Onegin tells the story of a world-weary city-slicker whose trip to the countryside sparks unexpected passion. And yet, the title character fights his feelings, leading to tragic, sometimes deadly, consequences.

It is the second time that Bintner performs the title character in director Robert Carsen’s classic production, which matches Tchaikovsky’s lush music to spare, autumnal sets. His first encounter with the production came in 2018, when he sang Onegin for the Canadian Opera Company.

“This is such an iconic production, and it is, at once, grand in its scale and beauty but also so simple in its intimacy,” Bintner says as he prepares to inhabit Carsen’s world once more.

He points the production’s simplicity as the source of its potency. “The vastness of the space that we have to work really allows us to bring to life and focus on these incredible characters and their relationships.”

That detail-driven approach is allowing Bintner to rediscover the character anew in this second outing. “I can feel already that, personally, I’m having a different experience this time around, even though it is the same production.”

With Onegin, Bintner takes a sympathetic approach. He sees the blasé aristocrat as jaded—an erstwhile romantic whose youthful dreams have been replaced by a life of weariness and excess.

Even in one of Onegin’s most divisive scenes—his chilly rejection of the bookish Tatyana and her heartfelt love letter—Bintner perceives the humanity in his character.

“In the case of his interaction with Tatyana, I think he’s trying to do the right thing. He acknowledges and sees this young, hopelessly romantic, youthful bright life in her,” Bintner says. “But I don’t think he feels that he would be the man that she wants him to be.” 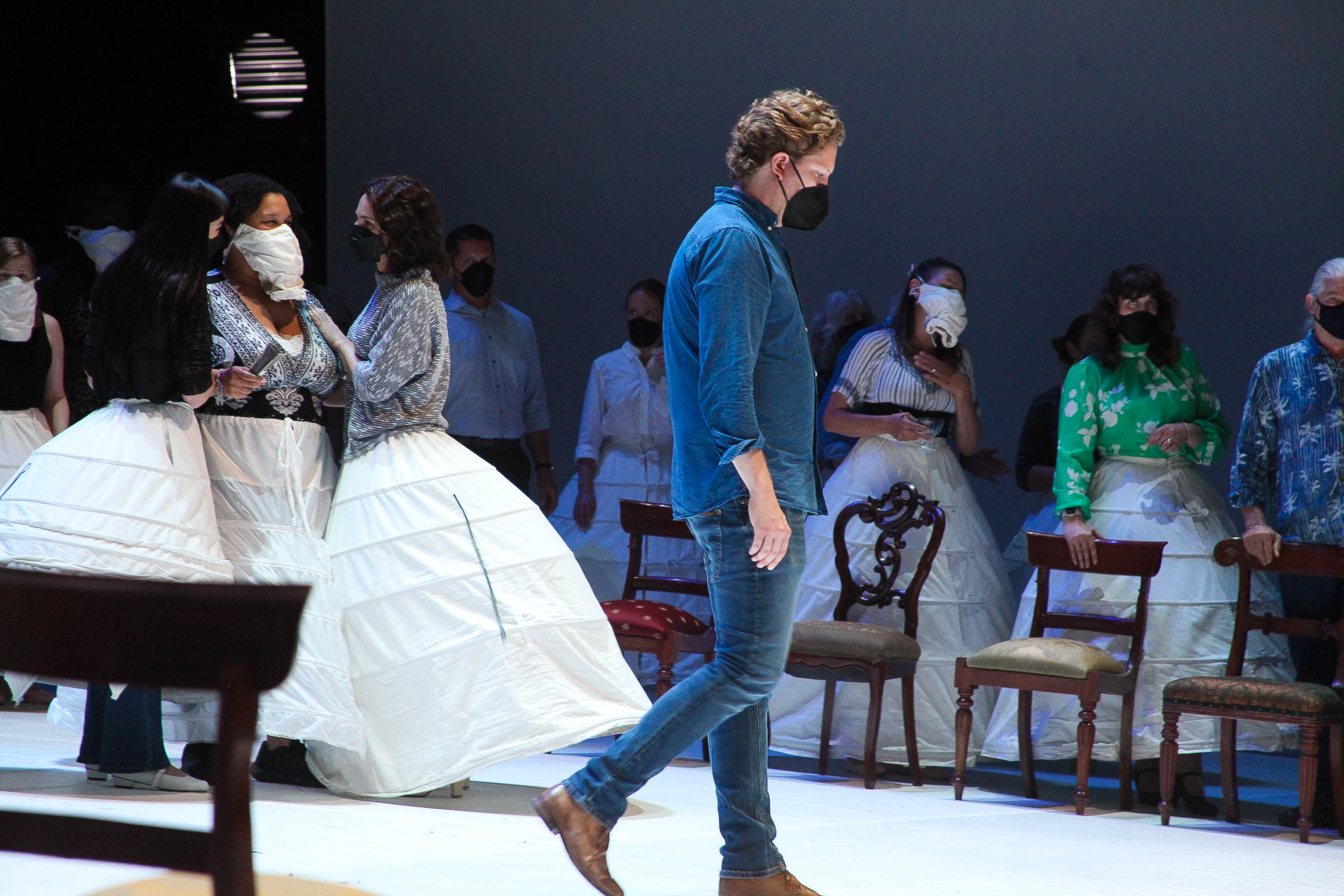 The challenge that lies ahead is mastering the Russian language of the opera—re-learning its intonation and flow. But otherwise, Bintner describes singing Tchaikovsky’s music as a “dream,” full of sweeping melody and emotion.

Bintner can’t wait to dive back in. “I think it’s the perfect role and the perfect production to be making my debut here.”

See bass-baritone Gordon Bintner in his Company debut with Eugene Onegin, opening on September 25 at the War Memorial Opera House, and follow him on Instagram using the handle  @gordonbintner.