It’s summer in the Greek capital of Athens, and with mountains to the north, east, and west, the season’s heat sits heavy over the city, trapped inside its basin.

Outside, citrus sprouts from the trees, and the cicadas greet the rising temperatures with a chorus of song. But inside, one of Greece’s most prominent conductors prepares to make a trans-Atlantic journey—one that will mark his first appearance in the United States.

Conductor Vassilis Christopoulos is no unknown quantity in Europe. The son of an oboist—and an oboist himself—he’s led orchestras from Germany to France to the Czech Republic. And in his native Greece, his leadership at the Athens State Orchestra helped the company emerge from a time of crisis.

As artistic director from 2011 to 2014, Christopoulos guided the orchestra out of the Great Recession and subsequent cratering of Greece’s economy. During that time, he was named a Knight of the Order of Arts and Letters by France’s ambassador to Greece.

Now, Christopoulos is looking to new horizons—and specifically, to California, where he will make his U.S. debut this September. There, he joins San Francisco Opera’s 100th season for a production of Pyotr Ilych Tchaikovsky’s Eugene Onegin, which tells the story of a Russian aristocrat so blinded by pride that he loses everyone he loves.

Ahead of his arrival in San Francisco, Christopoulos answered a few questions via video about his career thus far—and his favorite moments in Eugene Onegin. 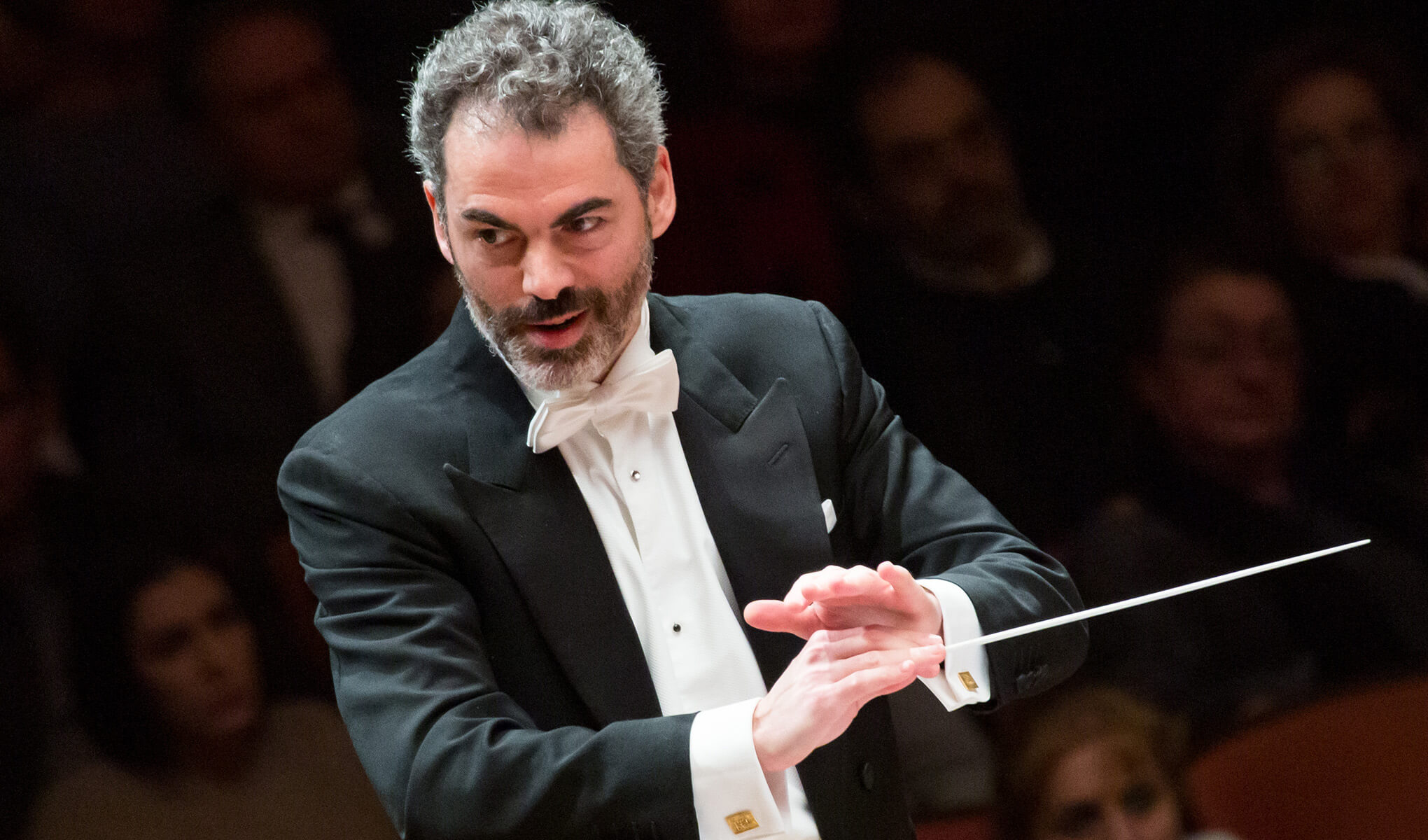 SAN FRANCISCO OPERA: Who did you look up to as a child? Who were your role models?

VASSILIS CHRISTOPOULOS: While there's a long list of people who have inspired me growing up, two names immediately come to mind.

The first one: Dimitri Mitropoulos, a Greek conductor who came from a small village in the Peloponnese and became music director of the New York Philharmonic Orchestra. His passion and dedication for music, I've always admired.

Interestingly enough, he wanted to become an Orthodox monk when he was young. But when he asked the abbot whether he would be allowed to have a small organ in his cell to practice, he refused. And so he went on to become a world-famous conductor.

A second person whom I've had the privilege of knowing very well personally growing up was a woman who made it her life's mission to collect and study Greek folk music from all corners of the country and to pass it on to future generations through her recordings, her teachings, and ultimately through her own refined interpretations.

From her, I learned to love and respect my cultural heritage. And her name was Domna Samiou.

SAN FRANCISCO OPERA: What was the first piece of music you fell in love with? What about it touched your heart?

CHRISTOPOULOS: The first sound I ever listened to and fell in love with—already before I was born in my mother's womb—was exactly the same sound you are now listening to in the background of this video: my father practicing long notes on his oboe. And to this day, I feel so comfortable and happy around people practicing.

Just practicing, whether it is long notes on a wind instrument, or scales on the piano, or singers just warming up their voice.

SAN FRANCISCO OPERA: When did you know you wanted to be a conductor—and why?

CHRISTOPOULOS: Ever since I was a very young boy, I was fascinated by conductors. And I used to take my grandmother's knitting needles or the chopsticks from a Chinese restaurant and secretly conduct in my room.

A few years later, when I was maybe seven or eight years old, my father—who at the time was principal oboist at the symphony orchestra of the Greek radio—started taking me with him to rehearsals.

And I used to sit on the floor in the orchestra, just between the principal oboe and the principal flute, watching the conductor frontally. And I remember renowned Czech conductor Václav Neumann rehearsing Mahler’s Third Symphony. It was a magical moment, a splendid experience. And I knew then that I had to be a conductor growing up.

SAN FRANCISCO OPERA: What was the biggest hurdle you faced in your career thus far? And how did you overcome it?

CHRISTOPOULOS: In the year 2011, I got appointed artistic director of the Athens State Orchestra, which is the oldest biggest and most prestigious symphonic ensemble of my country.

At the time, Greece was in the middle of a severe economic crisis. And so, shortly after I took over, the Ministry of Culture announced a 50-percent cut in the orchestra subsidy, retroactively, for that very same year.

This presented a huge challenge because guest artists had already been invited and the next season planned. How to keep the orchestra afloat without letting stuff go and without compromising its artistic integrity?

I immediately economized heavily on rent by moving into cheaper offices and focused on building the audience, especially attracting younger people, through a series of measures, such as a new modern design, introducing pre-concert talks, and so on. The result was a 50-percent increase in ticket revenue without raising ticket prices and the press hailing the renaissance of the Athens State Orchestra.

CHRISTOPOULOS: While it's difficult to objectively describe one's own style, I'd say that it varies a lot, depending on the needs of a particular musical excerpt. Sometimes the orchestra needs a clear pattern, sometimes rhythmical input, sometimes emotional inspiration.

I certainly try to be as clear and precise as possible, while avoiding flamboyant movements that can be distracting or even downright confusing for the musicians, even if they look good for the audience.

SAN FRANCISCO OPERA: If you didn’t have a career in music, what would you like to have done instead?

CHRISTOPOULOS: If I didn't have a career in music, I'd probably still be a conductor—a train conductor—because I've always liked trains a lot.

All joking aside, though, I think I might have become an interpreter or a translator because I have a great passion for languages and I have been learning one or another for as long as I can remember.

SAN FRANCISCO OPERA: How many languages do you use in your job as a conductor? How does knowing a given language come in handy?

CHRISTOPOULOS: So far, I have conducted rehearsals in six languages: Italian, español, français, Deutsche, elliniká [Greek], and of course, English.

I believe it is intuitively easier to understand the character, the articulation, the phrasing, the rhythmical structure of a musical composition if you at least have a notion of the composer's language.

And of course—in order to conduct opera well and to optimally support the singers on stage—it is very helpful to have an in-depth understanding of the libretto and to know what the singers are doing, what they have to do with their voice. It is not the same to sing, for instance, “Recondita Armonia” or to sing “Welche Schöne Nacht.”

SAN FRANCISCO OPERA: Are there differences between orchestras in different countries and continents? How does that affect your approach?

CHRISTOPOULOS: There are indeed some differences between orchestras in different parts of the world. Musicians in Southern European countries, for instance, tend to sometimes be little less disciplined, a bit more noisy in the rehearsals, perhaps distracted by the sun and the great weather outside. But if you win them over, they will focus and will give you a very passionate interpretation.

On the other hand, musicians in some Anglo-Saxon countries are great sight readers, very well prepared, are usually very disciplined and quiet. And so the entry level of the first rehearsal is phenomenal, but they might sometimes give you the impression of a more distant matter-of-fact music-making. And again, if you win them over, you will get a thrilling performance.

So in conclusion, I don't think that my approach varies that much. I see the conductor's job as being the focal point in the orchestra, which can unite the musicians' forces and bring out the best.

SAN FRANCISCO OPERA: Have you ever been to San Francisco before? What are you most looking forward to visiting while here?

CHRISTOPOULOS: I've only been to San Francisco for a day, many years ago, which obviously wasn't enough to discover this great city. So I'm really excited about the prospect of spending several weeks there, thanks to the invitation of the San Francisco Opera.

To be honest, I am most looking forward to discovering the opera house itself, which looks amazing on photographs. I'm eager to explore different neighborhoods and communities, try different foods. I will, of course, not miss some of the main tourist attractions, for instance, the Golden Gate Bridge. And I have certainly reserved a day for a visit to the Muir Woods.

SAN FRANCISCO OPERA: What should audiences listen for in Eugene Onegin? What makes its music beautiful to you? Tell us about the highlights.

CHRISTOPOULOS: Many operas are about fatal blows of destiny, but in Eugene Onegin, it's about something different. Happiness for Onegin was at arm's reach. Only, he failed to recognize it and grasp it. And that's what makes this drama so relatable.

And Tchaikovsky is a fantastic storyteller. Not only did he compose sublime melodies for the singers, but he's telling the story through the orchestra texture.

Take, for instance, the beginning of the famous letter scene. You have a simple melody in the oboe. Just like Tatiana’s plain youth. But this melody is dispersed with doubt from the rest of the winds. And underneath you have syncopated rhythms from the strings, depicting the inner turmoil of the Tatiana’s character.

Take all these elements together, and you have the canvas on which the story is being told. That's the beauty of Tchaikovsky’s music, and that's what makes it so moving.

Now, the letter scene is, of course, one of the major highlights of the opera. I'm also particularly fond of Lensky’s magnificent aria “Kuda, kuda vï udalilis vesny moej zlatye dni?” Which means, “Where, oh, where have you gone, golden days of my youth?”

See conductor Vassilis Christopoulos in the orchestra pit this fall in Pyotr Ilyich Tchaikovsky’s opera Eugene Onegin, opening September 25. And follow along on his adventures on Instagram by following @vassilis.christopoulos.