Soprano Nadine Sierra on Returning to Singing After COVID-19

When she picks up the phone, she’s sitting on a stoop in New York City. Her apartment building has been cordoned off: From what she’s heard, someone inside has reportedly collapsed with COVID-19 symptoms.

It’s all left soprano Nadine Sierra feeling emotionally raw. Her own experiences with the novel coronavirus are still fresh in her mind. 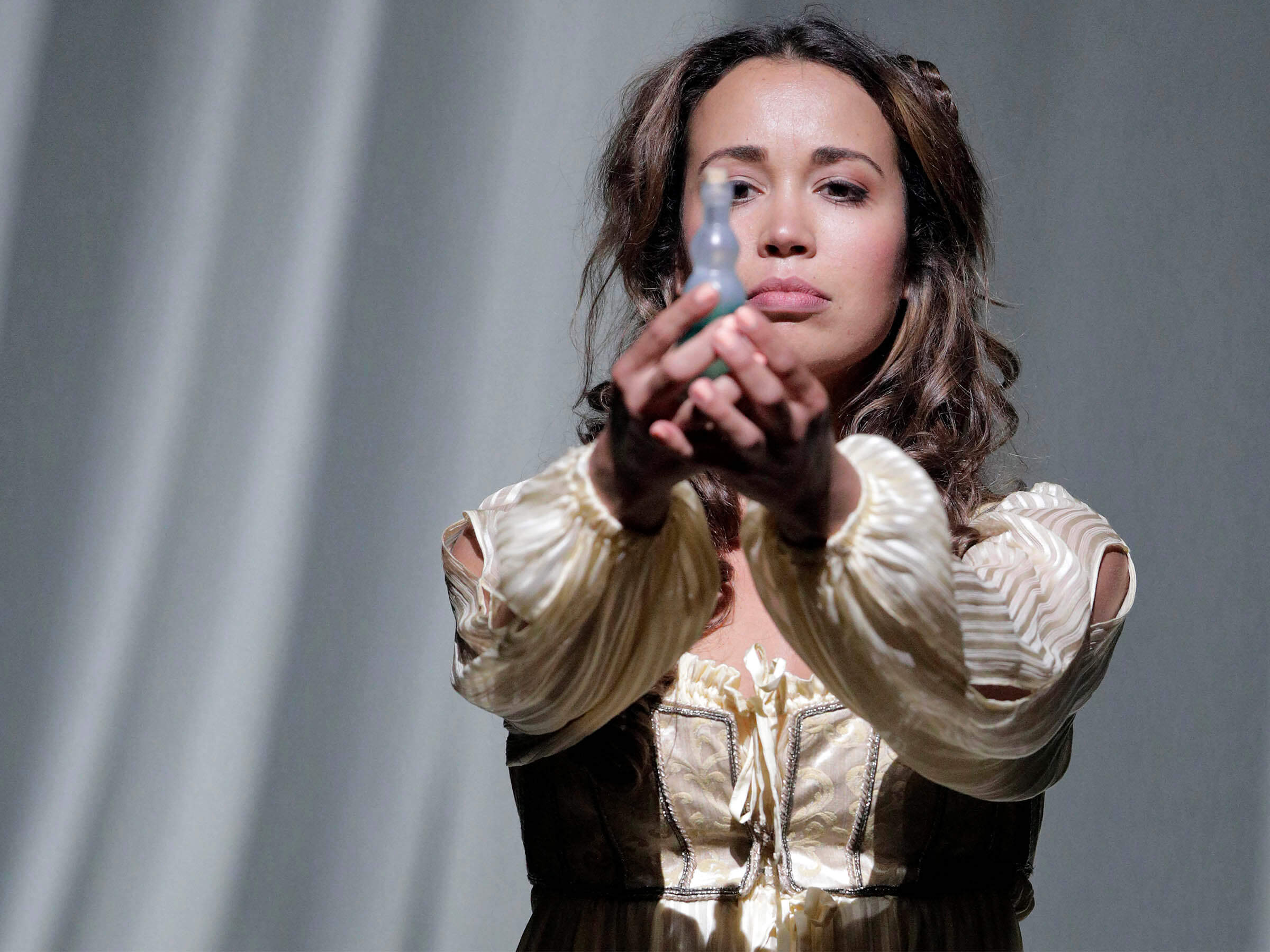 Does she want to speak some other time? No, Sierra waves away the idea of rescheduling this interview. But what about the stigma? Isn’t she afraid that talking about COVID-19 will lead to scrutiny about her behavior, her intent, her politics? No, she says: Sharing her story is “more important than holding this little secret inside.”

“We have to help one another through this kind of thing,” she explains. “You never really think that these things are gonna happen to you until they just do.”

Sierra, 32, was in Spain this March when much of Western Europe went into lockdown in response to the spread of the novel coronavirus. Her final performance of Charles Gounod’s Romeo and Juliet in Bordeaux, France, had been canceled, and she spent those first months weathering the quarantine in Valencia with her fiancé.

But when the opportunity arose to return home to the United States, she took it. Sierra flew to Florida to reunite with her parents and two sisters. At first, everything was fine. Sierra couldn’t remember the last time she’d spent so much time with her family: Her career usually had her jetting around the world, singing on some of opera’s greatest stages.

Sierra first started vocal lessons at age 6. She wasn’t more than a teen when her opera career started to take off. Even then, she recalls taking the art form seriously. She already knew this was what she wanted to do with her life.

By 15, she had sung on National Public Radio. By 20, she had become the youngest singer yet to win the prestigious Metropolitan Opera National Council Auditions. And by 23, she’d made her Carnegie Hall debut. Rarely had she had three unbroken months to spend with her family.

The joy of returning home was interrupted by a frightening development. In July, Sierra says she woke up with a sore throat. That morning, she didn’t think much of it. She had been careful to wash her hands and wear a mask outdoors, and she had limited her public interactions to the pharmacy and the grocery store.

“I didn't immediately think, ‘Oh no, I have COVID,’” she says. “But then I noticed I started to get a fever throughout the day. Then the fever got a little higher and I thought, ‘Okay, maybe I do have it.’”

Her first COVID-19 test came back negative. But then when Sierra’s mother started to get sick too, they both decided to get tested. This time, the nasal swab came back positive. The news shocked Sierra.

“Some of the symptoms were actually really odd,” Sierra says. “I did have to cough a lot. But my odd symptoms was where I got an extreme rash all over my body. It almost felt like I had chicken pox all over again.”

Soon, her youngest sister was also reporting symptoms: She lost her sense of taste or smell, just like Sierra had. But Sierra was most worried for her mother: Both she and her mother have a condition called mitral valve stenosis, she says, that constricts blood flow to the heart.

“Sometimes you feel a little flutter, almost like you have butterflies in your chest,” she explains. For Sierra, “there were a couple of days whilst having COVID where that feeling was heightened to hours on end. It wasn't painful, but it was very uncomfortable.”

For her mother, though, it was much worse. A Portuguese-born woman in her sixties, she was normally athletic — and “basically a vegan,” Sierra adds. But COVID-19 delivered a wallop.

“She experienced not even being able to walk. She couldn't move her body. It just took too much energy,” Sierra says.

It was a scary time. Just that spring, Sierra had lost a friend to complications related to COVID-19: Joel Revzen, an assistant conductor at the Metropolitan Opera. They had both been scheduled to perform at the Classical Tahoe Summer Gala in Nevada that summer.

That loss loomed in Sierra’s mind as she tried to care for her mother. And her nerves only increased when her father, a firefighter of Puerto Rican heritage, decided to join Sierra’s oldest sister in caring for their three sick family members.

He stayed by her mother’s side throughout her illness. That decision meant that he and Sierra’s oldest sister also had to strictly quarantine themselves, in case they too were carrying the virus.

“The two of them were just like little heroes in our family,” Sierra says. “They didn't hesitate.”

By August, Sierra, her mother, and her youngest sister had all recovered and tested negative for COVID-19. They practiced Tae-Bo and other at-home workouts as they recovered.

And just this month, confident she had a clean bill of health, Sierra returned to the stage to perform a televised concert with the Gibraltar Philharmonic Society. To travel again, Sierra had to agree to abide by a strict set of rules, and the philharmonic society arranged for her to get tested during her stay.

“I loved getting into Gibraltar. They told me that what I was doing was essential work. That's the term that they use. And I thought, ‘Wow, that's so nice as an artist to feel essential,’” she says.

It’s a marked contrast to how Sierra feels artists are sometimes treated in the United States. She says it can be a struggle for performers here to be understood as “people too who have bills to pay.”

Opera, she continues, “is a real job and not something that should be exploited or gotten for free as much as humanly possible.” Some of her work stateside, she says, “just doesn't feel as valued as it does there.”

Some of her work stateside “just doesn't feel as valued as it does there.” The different funding models are part of the issue, in Sierra’s opinion. In Europe, the arts receive more government support, whereas in the United States, opera relies on private funding. And Sierra is terrified what that might mean for opera’s future in a post-pandemic America.

As she sits on the streets of New York, she sees people on the street suffering, she says. People kicked out of their apartments because they can’t pay rent. People for whom the pandemic and resulting financial crash have upended their lives.

Opera is going to be less active than before, Sierra predicts, “simply because it needs the money. It needs the support. And if you can’t get it from the government, you have to beg the people. And if the people can’t give it to you because so many jobs were lost?”

She trails off. Not for the first time in this conversation, her voice starts to tremble.

“I miss the togetherness. I miss just being able to be together in one room and sharing the exact same feeling of something that's so beloved with so many other people,” she says. “I would love to live that feeling again, and I really hope that it happens because there's nothing that can replace that feeling.”

Until more theaters reopen, Sierra — like many performers — has been teaching voice lessons online to aspiring opera singers. She’s found that her students are fully aware of the challenges opera faces. But they won’t back down. Their hope gives Sierra hope too.

If the coronavirus were to end opera forever, she says she would have no regrets. “It can maybe take away the theater as a community, it can take away the experience, but it can't take away the love for it and the community that's behind it.”

But with optimism for an end to the pandemic, Sierra looks forward to when she can step into a crowded theater again — and give a stranger a hug.