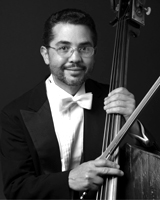 A native of San Mateo, California, Mr. D’Amico graduated from the San Francisco Conservatory of Music in 1975 and was awarded a fellowship at the Tanglewood Music Festival in 1976 and 1977, where he performed as a member of the Tanglewood Fellowship Orchestra.

Mr. D'Amico is a 20-year member of the National Academy of Recording Arts and Sciences and can be heard on many recordings with the San Francisco Opera and Ballet Orchestras. His other performances in the recording studio at Skywalker Sound include soundtracks for numerous films and video/computer games.

When he is not playing the bass, he is known for showing many members of the Orchestra the joys (and the occasional sorrows) of salmon fishing on the Pacific Ocean. He is a regular practitioner of meditation and Kriya Yoga. His extensive musical career has also fostered a deep appreciation for the therapeutic properties of sound. He now actively studies sound healing.