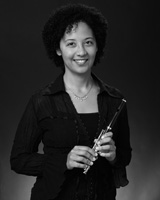 Stephanie McNab joined the San Francisco Opera Orchestra in 2002. Born into a musical household in Los Angeles, her parents met while touring with the San Francisco Ballet as members of the orchestra. Ms. McNab received a degree in music from the University of California at Los Angeles, where she studied with Sheridon Stokes. While working toward her degree, she trained in the Young Musicians’ Foundation Debut Orchestra and the American Youth Symphony under Mehli Mehta. During this time, she received several honors and awards, including fellowships from the Los Angeles Philharmonic, the Leni Fe Bland Foundation and Rotary International.

Ms. McNab is a former member of the Buffalo Philharmonic, the New Mexico Symphony and Long Beach (CA) Symphony. She has also appeared as a guest piccolo and flutist with the St. Louis Symphony, San Francisco Symphony and the San Francisco Ballet Orchestra. Her many solo appearances include performances of the Carmen Fantasy with the Los Angeles Philharmonic and the Ibert Concerto with the Carmel Bach Festival. In July of 2018, Ms. McNab performed at the Music@Menlo Chamber Music Festival. She served on the faculty of California Institute of Technology.