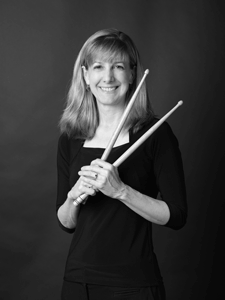 Patti Niemi has been a member of the percussion section of the San Francisco Opera Orchestra since 1992. She has made sound and video recordings with the Opera including Turandot, The Merry Widow, the contemporary operas Harvey Milk and Dead Man Walking, and the Opera's first orchestral recording entitled Symphony at the Opera. Prior to joining the San Francisco Opera Orchestra, Ms. Niemi was a member of the New World Symphony from 1988-1992, under Music Director, Michael Tilson Thomas. During that time, she participated in New World's Tangazo recording as well as European, South American, and Asian tours. In 2000, Ms. Niemi recorded a CD with New York's Concordia Orchestra which included Christopher Rouse's percussion works Ku-Ka-Ilimoku and Ogoun Badagris. She recently recorded chamber music for composer Howard Hersh, including the premiere of Night for Clarinet and Marimba with opera colleague, Jose Gonzalez Granero. Her first book, a memoir entitled Sticking It Out, won the 2017 Independent Publisher Book Award's Silver Medal - Performing Arts category and was named the Philadelphia Inquirer's Best Classical Music Book of 2016. It is available in the San Francisco Opera Gift Shop. Ms. Niemi earned a Bachelor of Music degree from The Juilliard School in 1987.