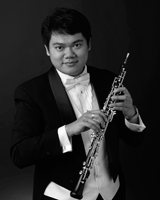 Mingjia Liu joined the San Francisco Opera as Principal Oboe in 2010. Recognized for his charismatic performing skill and "singing ability" on the instrument, he was selected from nearly 180 applicants for his outstanding playing and musicianship.

Since joining the orchestra, Mr. Liu has received many favorable reviews from critics:

"The standout was Principal Oboist, Mingjia Liu, who plays his solos exceptionally well. This however comes as no surprise as Liu's technique is always clean and flawless in the pit ..." ~ GB Opera Magazine and quotes from Nicola Luisotti, Music Director of the San Francisco Opera as "... having his sound come from God".

A native of the northern coastal city Qingdao in China (the home of TsingTao beer), Mr. Liu was born into a family of art and literature. At the age of 12, he was enrolled at the Middle School attached to the Central Conservatory of Music in Beijing and was immediately recognized as an outstanding student among his peers. Her studied with Weidong Wei, Professor of oboe at the Central Conservatory of Music and graduated with the highest distinction in 2006. He then went on to continue his studies in the United States at the Oberlin Conservatory of Music. He won a coveted position in the classes of two of the most sought after oboists of our time, Robert Walters from the Cleveland Orchestra and Alex Klein, Principal Oboist with the Chicago Symphony Orchestra. He appeared as a Fellowship Musician at both the Colorado College Music Festival and at the Aspen Music Festival where he worked closely with two other distinguished oboists, Richard Woodhams and Elaine Douvas. He was a finalist in several notable auditions such as Principal Oboe for the Seattle Symphony and the Grant Park Music Festival in 2009 and the Marlboro Music Festival in 2010.

In 2009, at the age of 21, he won the position of Principal Oboe of the Kansas City Symphony Orchestra under the direction of Michael Stern. During that time, he collaborated with such artists as Gil Shaham and Emmanuel Pahud among others. In his short tenure, he received many favorable reviews among the local critics:

In 2011, he made his debut as a soloist with the Qingdao Symphony Orchestra and was especially lauded by Chinese critics. On his most recent tour of China, he was seen as an emerging star of Western classical music. Recognized not only for his outstanding performing skills, Mingjia Liu is gaining considerable recognition as a teacher both in the United States and abroad. He continues to show his enthusiasm for education through this genre as can be attested by his recent invitation from the Central Conservatory of Music to give both recitals and master classes at the First Beijing International Oboe Festival. Mr. Liu joined the oboe faculty of the San Francisco Conservatory of Music in 2015 and he regularly appears as a special guest teacher at his Alma Mater, the Oberlin Conservatory of Music. In the summer of 2014, he qualified for the position of Principal Oboe of the San Francisco Symphony and performed as Acting Principal Oboe from January through May 2015. Mr. Liu was a super finalist for the principal oboe positions of the Chicago Symphony, Philadelphia Orchestra and Los Angeles Philharmonic in 2018. This year he was also elected as the Vice President of the International Double Reed Society and joined the faculty at the Aspen Music Festival.