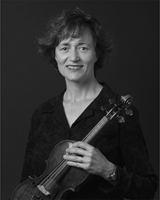 Violinist Martha Simonds was born and raised in Washington, D.C., where she received early musical training in the public schools and in the internationally acclaimed D.C. Youth Orchestra program. She earned her Bachelor of Music degree with Joseph Fuchs at The Juilliard School and her Master of Music degree at the Eastman School of Music as teaching assistant to Donald Weilerstein. She received further training during the summers at the Kneisel Hall Festival in Blue Hill, Maine, the Yale Summer School, and Aspen Music Festival.

Ms. Simonds is Associate Principal Second Violin of the San Francisco Opera Orchestra. She was a founding member and Associate Concertmaster of the Grammy-nominated New Century Chamber Orchestra for ten years. Ms. Simonds has performed solo and chamber music recitals extensively throughout the Bay Area as well as the East Coast and Canada.

Marty met her husband, architect David Teeters, while studying improvisational acting. They enjoyed raising their children in the lovely Island City of Alameda.