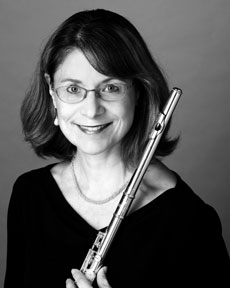 In her earlier career, Julie participated as an orchestral fellow in the Berkshire Music Festival at Tanglewood, and she was featured in a CBC television documentary with Jean Pierre Rampal.  For many years Julie was a member of the San Francisco Chamber Orchestra, the San Francisco Chamber Symphony and the Anchor Chamber Players. As a soloist, she has appeared at the Carmel Bach and Mendocino Music Festivals, and with the New Century Chamber Orchestra. She has recorded for New Albion and Teldec Records, among others.

In addition to orchestral playing, Julie enjoys collaborating with colleagues in chamber music settings. She has appeared with many Bay Area ensembles, including the Gold Coast Chamber Players, Eos Ensemble, Master Guild Series and the Sierra Chamber Players. Julie has also performed in concert with Renee Fleming, Susan Graham and Frederica von Stade.

When not playing the flute, Julie enjoys being active at the gym, the yoga studio, on her bike or on hiking trails. Julie resides in San Francisco with her husband, bassist Ken Miller.