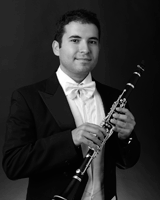 Born in Iznatoraf, a small village in the south of Spain, José González Granero joined the San Francisco Opera Orchestra in 2010 and holds the position of Principal Clarinet. He began studying the clarinet at the age of eight. Both his father and grandfather are band directors. Mr. González Granero received his Bachelor Degree from Granada Superior Conservatory (Spain) and G. Verdi Conservatory (Italy). In 2007, he moved to Los Angeles to attend the University of Southern California and The Colburn School of Music to study with renowned clarinet teacher Yehuda Gilad.

Mr. González Granero enjoys composing music for concert band and wind ensemble.  He won Second Prize in the Ville de Comines-Warneton composition competition in Belgium, and some of his works have been published in Spain and Italy.