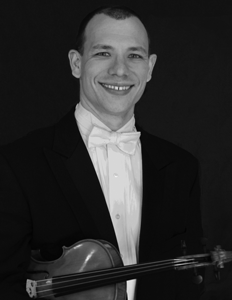 Jeremy Preston joined the San Francisco Opera Orchestra as Principal Second Violin in 2014. He is also the Associate Concertmaster of the Oakland East Bay Symphony. Before moving to San Francisco in 2012, he was a tenured member of the North Carolina Symphony for seven seasons.

Jeremy will return to the Banff Centre this Winter where he will complete a recording project with his violin/piano duo, Bella2. He enjoys playing chamber music and has performed at many venues throughout the Bay Area. Previously, he was a member of the North Carolina String Quartet and frequently performed with the Mallarme Chamber Players, the Pearce College Manning Chamber Players, New Music Raleigh and the Eastern Music Festival Chamber Players.

Trained at the New England Conservatory of Music, Rice University and the Cleveland Institute of Music, Jeremy's teachers include Marylou Speaker Churchill, Lynn Chang, Kathleen Winkler, Sally Thomas and William Preucil. His chamber music coaches include Norman Fisher, Pamela and Claude Frank and members of the Cleveland and Julliard Quartets.

Jeremy enjoys living in the beautiful city of San Francisco and spends his spare time hiking with his 4 year old Australian Shepard, Lucky.