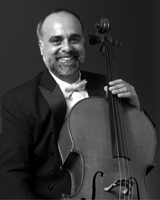 A member of the San Francisco Opera Orchestra since 1988, cellist Emil Miland is an acclaimed soloist, chamber and orchestral musician. He made his solo debut with the San Francisco Symphony at age 16, the same year he was selected to perform in the Rostropovich Master Classes at the University of California, Berkeley. Mr. Miland was honored in 2010 when Frederica von Stade asked him to accompany her in Carnegie Hall for her farewell recital.

In 2018, he collaborated with Maestro Michael Morgan to perform the premiere of David Conte's Cello Concerto, a work commissioned for Miland to honor the 50th anniversary of the Bear Valley Music Festival; a memory made more special by Morgan's untimely passing. In 2022, Mr. Miland returned to Bear Valley to collaborate with the festival's new Music Director, Alexander Mickelthwate, performing John Williams' Elegy for Cello and Orchestra.

Recent projects include recording "Intonations" by Jake Heggie for the Violins of Hope project, performing as solo cello on the soundtrack of Gordon Getty's opera, Goodbye Mr. Chips and a new work, Duo for Violin and Cello by David Conte, which he performed with San Francisco Opera Orchestra Concertmaster, Kay Stern. Upcoming performances include "Kamala's Hope", a new piece by composer Candace Forest, with soprano Shawnette Sulker, pianist, Jerome Lenk and the San Francisco Girl's Chorus. Miland will be featured in the world premiere of critically acclaimed Bay Area composer, Shinji Eshima's recently commissioned chamber work, "Hymn for Her", celebrating Music at Kohl Mansion's 40th anniversary season in Burlingame, California. He will also appear in an upcoming documentary about the life of his dear friend, the late mezzo soprano, Lorraine Hunt-Lieberson. Mr. Miland performs on a cello by Giovanni Grancino made in Milan, Italy in 1718.