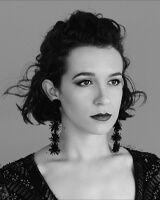 Celebrated for her “blend of vocal sparkle and theatrical charisma” by the San Francisco Chronicle, soprano and third-year San Francisco Opera Adler Fellow Elisa Sunshine made her San Francisco Opera mainstage debut as the Shepherd Boy in Tosca in 2021 and returned to the War Memorial Opera House this past summer as Flower (voice)/Lady-in-Waiting in Bright Sheng and David Henry Hwang’s Dream of the Red Chamber. Her 2022–23 Season engagements with the Company include Sister Anne of the Cross in Dialogues of the Carmelites and Annina in La Traviata.

She recently made her house debut with Pensacola Opera as the Queen of the Night in Die Zauberflöte. As a 2019 participant in the Merola Opera Program, she created the role of Selena in the world premiere of Jake Heggie’s If I Were You, where she “mined every bit of drama out of Selena’s revelatory final encounter with Diana” (Opera Today). She also sang a “fun, feisty, and powerful” Marie (San Francisco Examiner) in a scene from Donizetti’s La Fille du Régiment as part of the Merola Grand Finale. Previous engagements include Gretel in Hänsel und Gretel (Regina Opera), Musetta in La Bohème (Regina Opera), and Elizabeth Christine in The Sorrows of Frederick (Center for Contemporary Opera).